FEBRUARY: Moon when Coyotes are Frightened

Different tribes of Native Americans had various names for full moons. In my ‘Year of Indian Moons,’ I have stuck to one particular source, using the names as a rough guide, mixing up a variety of legends and myths. The Coyote is a key figure in these stories, and I could not possibly write this poem without referring to Joni Mitchell, for whom indigenous folklore is a source of great inspiration. I urge you to listen to her album Hejira ­– a masterpiece that has inspired me in so many ways.

There are a couple of problems with the second poem of this cycle. I suggested above (or below, in blog geog.) that January began with a Blue Moon, but to be accurate, this fell on New Year’s Eve. According to certain schools of thought, a Blue Moon occurs when the moon turns full a second time in the same month. Since sidereal and synodic months are not aligned, the lunar and solar years do not run concurrently. A Blue Moon only happens once every two and a half years – hence the expression, possibly from Shakespeare, meaning rare or absurd.

Unfortunately, given that the moon’s cycle takes 29 days, 12 hours 44 minutes and 2.8 seconds, it would be impossible for a full moon to fall twice and therefore turn blue in February – even in a leap year. In some years – 1961, for example, when the moon was blue both in April and January – February missed out on a full moon altogether. The sly dog must’ve been tickled pink that year: no regrets, nor leap of faith; no fears nor hopes; no foes nor friends; no ends, but one (un-)equal eternity.

However, the Farmers’ Almanac of Maine (look it up – you’re on the web), besides listing a load of alternative full-moon nomenclature, suggests that, when occurring in those years when there is a thirteenth full moon, a Blue Moon is the third full moon of four in a fixed season usually containing three. By their rule, this will always fall on the 20th - 23rd of May, February, August or November. So, it could be argued that indeed Coyote saw a Blue Moon in February 2000, which is when this cycle was written, even though he claimed that the moon was full on the 1st of Feb (as it was) and again on the 29th. Does this make any more sense?

Of course not: he can’t be trusted either way. 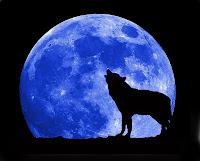 Moon when Coyotes are Frightened (Tewa)


The first of Feb, by leap of faith, finds the moon full,
and the sly dog duly frightened...

Bear wants back his frozen-off tail; Heron, the
ante-prometheus, wants back his stolen fire
– and the great god himself, whose heat and light
Coyote captured, and arrayed the wind's twelve
quarters, irrespective of the tides;

Also the greedy Wishpoosh, whose corpse provided
slices for each and every tribe (or did they
sprout from the charred feathered fancy-dress
which caught out that partying Heron?);

Every Bird sides with the four little ducks, the earliest dwellers,
whose bravery supplied the audacious tempter
– the callous, impudent trickster – with
Dirt: dry land dredged from their Watery Paradise Garden.

(This, the Crow's story: but who can be trusted in myth?)

He's been around since creation began, shaping the
world out of animal altruism, deceit, or practical joke.
Nine times out of ten his game backfired:
Hawk would chase him through the Whisker Wheat,
While Road Runner traps and taunts Old Wile E.,
beating his retreat, hooting among the tumbleweed.

It's true, he'll never learn: he's far too far
from Appaloosas and Eagles and Tides;
When his own Mother bit his inquisitive nose,
sent him away on his quest to fend for himself,
She thus diminished his ego strength to egotistic pride:
The sin by which the angels fell was not Coyote's downfall.

He's a slippery serpent, born to writhe in the dust of regret,
the eighth and deadliest amendment, ever mourning
his velvet coat, and the loss of his son to eternal death:
(Wolf – doubtless metamorphosed to a greater deification –
saw Coyote laugh on the dark side of his face)

He only opposed the after-life for a laugh:
to him, the acceptable paradox of the human race,
to bask in the light of certainty, or sweat in the dark
while awaiting life's sentence, was a bit of a farce.

This month, however, the planets exercise their own celestial mirth.
As the days of fear wear off, Coyote persuades the Old
Father for just a little extra time
(the humans, bound to their pendular systems, concede):