Last week, as a contrast to the light relief of performing doggerel on a Tour Bus (my poetic contribution to the history festival, Previously...) I reviewed a play that was originally produced as part of the Just Festival, and subsequently found its way into Previously.... The review was published, appropriately, on the International Day for the Elimination of Violence Against Women, the play was a bold exploration of the causes of domestic violence.
http://thomdibdin.co.uk/review-kiss-cuddle-torture-revisited/#more-7822 This is an issue that resonates in my own writing, and lies beneath a deeper narrative. In former times, I was part of a group that was instrumental in instigating the predecessor of the Just Festival, the Festival of Spirituality and Peace. I was responsible for programming a great many innovative events throughout the year with the parent organisation, Creative Space, giving a platform to performers and artists who dared to challenge the status quo.

I was particularly proud of a year-long project that explored the themes of violence against women, and related, complex issues such as the injustice that exists in society borne out of prejudice, presumption and intolerance. Regrettably, we only scratched the surface of this uncomfortable subject. Then again, it was more than I could cope with to uncover truths too terrible to reveal.

As part of this project my own take on domestic violence was a radio-play, performed half on-stage, with off-stage sections leaving the viewer to draw their own conclusions as to what was happening (or not.)  I also produced a triptych of short plays about a young daughter caught in a violent battle between her estranged parents. It was based on real experience, but I took the work on as a legitimate and well -crafted work of fiction.

Recently, I was shocked to hear that my friend, who wrote that piece, had died suddenly, unexpectedly earlier this month. I still do not know the cause of his death. The greatest tragedy is that he, as far as I know, was never reconciled with his daughter, the 'real' child at the centre of this dreadful imbroglio who had been so tenderly portrayed in his fictional account of the unfortunate tale. He will never know the end of the story, and neither will I.

We live in a cliff-hanger culture, yet we like to know how a film, a book, a play will end. The narrative of life is never guessable, straight-forward or conclusive.

This week, as part of Book Week Scotland, the Kalopsia Collective are exhibiting their Octavo Fika, on the theme of 'Narrative.' My work, displayed in photographs and a pamphlet, is a sequence of poems based on the Gormley installation, 6 Times, that runs along the Water of Leith, from the Modern Art Gallery to Ocean Terminal where the exhibition is being held.

The central poem of my sequence seeks to challenge the concept that I explored in my review of Jennifer Adam's play. What lies below the surface, beneath the skin, the bruises or the deeper narrative of our lives? When I was writing Walking on the Water, I stood near the sculptures, listening to the comments of on-lookers and passers-by. I spent a year taking photos, watching how the light changed the look of the work, the effect on the water, and the viewers' perceptions on each of the six statues.

For FIGURE IV, I had copious notes, scribbles and images floating around. In the end, it was an overheard remark of a young child that gave me the central premise of this piece. My sequence of poems is a reflection on 6 Times, a revelation of my interpretation, and - for those who dare to dig without prejudice - a glimpse of what lies beneath a complex narrative. 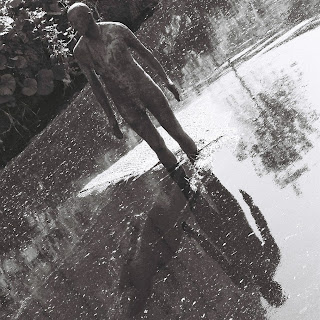 ‘Is there a story,’ asked the infant,


nonchalantly pointing at my manhood.


There are, I figured, three dimensions:


my Shadow on the murky surface;


my Reflection in the water;


and above it all, my Self.

I hope that people will come and view the inspirational and intricate art-books that make up the Octavo Fika exhibition. And for those who like something a bit different, I'll be performing Walking on the Water at some point this Saturday, after giving a workshop on poetry performance. Poetry and plainchant in a shopping centre!

Beyond the Azure Plain of Blue

Recently I’ve been writing a series of blog-articles about the Spoken Word scene for the All Edinburgh Theatre website. I’ve written about some of the groups, organisations and events on my blog before, but since I’ve been invited to do a more comprehensive round-up (more comprehensive, perhaps, than has been done previously) elsewhere, I’ll use my blog to shamelessly promote some of the Edinburgh Events that I am involved in.
http://thomdibdin.co.uk/category/blog/
Besides the usual run of open-mic, and poetry-slam events run by the likes of Inky Fingers and Blind Poetics, I have read (or performed) my work at the Antihoot Open Stage, the Percy Poets, and Musselburgh Hot Pot. I also had my name pulled out of the hat for an impromptu poem at the last Shore Poets (I went prepared as always with a poem in my head) but I have yet to win the coveted Lemon drizzle cake.
At the end of this month, KALOPSIA COLLECTIVE are holding an exhibition of art books. I have been invited to ‘display’ a pamphlet of my poems and photos titled Walking on the Water. I won’t be reading it, but many people will have seen me perform the piece at Caesura and 10Red, interspersing the pictures and poems with sung Gregorian plainchant. Needless to say, the pamphlet will be available for purchase. http://scottishbooktrust.com/events/octavo-fika-narrative

Another poetry performance may turn out strangely memorable due to the location. Inky Fingers have teamed up with Edinburgh Tours and, as part of the Previously... history festival, have commissioned poets to write pieces to be performed to unsuspecting tourists. It’s called “Poets on a Tour Bus” – and, yes, I’m one of them. Writing to a remit is not particularly easy; I’m not sure my poems will last more than a single journey.

When I submitted a wee story last year to Monster Zine, produced by an elusive group called the Antisocial Writers Club, I was invited (as a grateful contributor) to what was one of the best launch parties I’ve attended. Now I have become more involved (on a purely anti-social level) and so will be performing (ironically) someone else’s work at the coming launch. This year’s theme is Circus. It will be entertaining, theatrical, and memorable.  And there will be an elephant in the room. Perhaps. 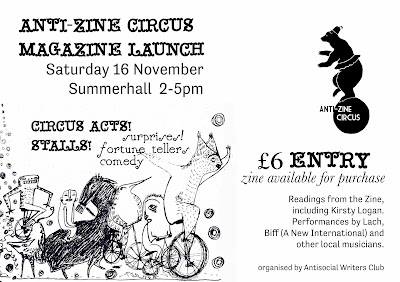 This brings me to the real reason for today’s bloggage. It is the 12th, and time for the next of my Twelve Tones of Blue poems. How do I tie this in with the Spoken Word scene? That’s easy! At the last Rally & Broad spoken-word Cabaret, amid the mayhem of music, dance, and wordsmithery, the audience threw paper aeroplanes at each other. As you do.
Canto XI is all about regretting those things we never did, and nostalgia for the paper planes we used to throw.

She made a paper plane to


remind herself of you,


that puerile time you both flew


planes from the landing on New

She tested it. It sailed through


the air. And landed too.


Then the cold wind blew.

Inside, the words she drew


Concealing this with glue


she stuck the wings and threw


the thing. As if you knew,


she painted it blue.