Although the great delight of the is observing how the sunlight does different things to the building throughout the changing seasons (several of which can occur in one day in this city) sometimes, the museum treasures are not so well illuminated.  Some never see the daylight, which means that the humble mobile-phone camera cannot capture my chosen artefact.  So for today, the picture is from a shop-display in (and elsewhere).

“I’ll sing for my supper,”
he said, peeling the potatoes.
“I’ll sew,” she replied,
winding the bob in.
He took the basso;
she tacked an upper line
on while the sewing-machine
chuckled and whirred a major third.
Closer harmony stirred.
Strands were spliced:
as the singer sowed another seed,
the potatoes stayed unsliced.
But at least they had wild oats for breakfast.
Posted by Tin Angel at 15:59 No comments:

One of the things l love to do is eavesdrop on people as they wander round galleries and museums.  Modern art is such that the responses of Joe Public are as valid an interpretation as the experts’.  Things ancient can be misconstrued also; here is a story of a small boy who didn’t quite ‘get’ the point of blessing the people with a piece of Jesus. 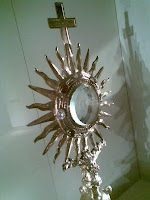 Today, the feast of celebrates the institution of the Eucharist. But relatively few churches, Anglican or Roman Catholic, perform Benediction, let alone strew the streets with rose petals as they parade the Host in glorious procession.  More’s the pity, I say: it’s one of the greatest pieces of Street Theatre… and hugely entertaining to see the bemused faces and listen to the passers-by.

I guess we’re lucky that, nowadays, in this country, people are able to carry out their devotion in public, however weird it may seem to others.

They jostled into a hole.
The heather-priest screwed the stem onto his travelling chalice.
“Too late: no time.”  He grabbed the reserved sacrament.
“What’s that clock for?” the boy asked, perplexed.
“It’s a monstrance,” he said, as he placed the Host into the casement, and lifted up the Body of Christ.
“A monster!”
“Benedicamus Domino,” he pronounced, as protestant footsteps angrily approached.
Posted by Tin Angel at 13:35 No comments: