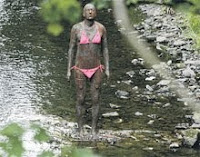 Throughout the Central Belt of Scotland in the early summer months, a plethora of out-door runs and races takes place; everything from Marathons to Moonwalks. The latter of these suits the subject of this year’s moon-theme: the Moonwalk is an event that raises money and awareness for and of breast cancer. Competitors wander through the night dressed in pink brassieres (mostly over their clothes – it can be chilly even at this time of the year) around the streets of Edinburgh. To illustrate, here’s a picture of Antony Gormley’s latest installation sporting a pink bikini… which brings me onto the subject of this month’s rant.
What’s the big idea of announcing in the news and on the radio the unveiling of a new Edinburgh installation by one of the great exponents of Public Art and then, not telling the public when or where to find him? Having spotted earlier this month a couple of the six figures, and recognised them instantly as Gormley, I was pleased to hear the news one morning on Radio 3 that the man himself was in town. Irritatingly, there was no information – not even on the world-wide-web – on where he could be found, so I jumped on my trusty orange bicycle and went to search out the elusive truth.
How foolish of me to think that a press conference was for anyone other than the self-aggrandising media, a few of the artistic elite and one random fan of Gormley’s work who having, by chance, caught up with this private party along the Waters of Leith enjoyed meeting and chatting with him, shared stories of Edinburgh, was bought a cream bun from a bakery in Canonmills. The private party strolled all the way to the foot of the Waters to marvel that the installation tucked behind the soulless Ocean Terminal Shopping Centre had been doused overnight with seagull shit!

Unfortunately, this random fan was not me: he was a van driver who, passing by the Modern Art Gallery, heard the news on his radio and, on enquiring, found himself at the right place at more or less the right time. I found him later, looking at the statue sunk into the pavement just by the zebra crossing between the Modern and Dean Galleries, and he told me, without gloating, that he spent the entire morning with the artist. He might not have made many deliveries that day, but this ordinary, pleasant and affable man was genuinely struck by how the Great Gormley was, equally, ordinary, pleasant and affable.


Arguably, Antony Gormley’s method could be described as ‘Realist.’ Scholars of English Literature will be told that the Realist Novel began with the likes of Jane Austen, Mary Shelley, even Charles Dickens; before these ‘new’ types of book were romances, allegories, fables, the Epic and other genres. This month’s poem makes a bold statement: claiming that somewhere between the Old and New Testament, something important happened that changed the concept of Truth forever, and sowed the seeds of what was to become The Novel.

The Gospel stories, about one extraordinary man, retold by those who to greater or lesser extent knew what happened, are presented in such a way that intelligent people who read with an open mind can interpret, enjoy, learn and possibly, live by them. ‘Realism’ is not the same as ‘realisticism.’ If we read all the Biblical myths as true stories, we relegate reality to fantasy-land. But if we read them as essential truths about the relationship between our selves and things of the deep, spiritual and infinite life-force that some call God, we come closer to understanding our very human condition.

Now I’m no evangelist – Heaven forfend! – but I must openly (okay, anonymously) commend any person to read the Gospel Truths with an open mind and ignore the closed, agenda-driven, spurious and mendacious claims of the media. You might prefer, perhaps, the didactic happy-ever-after stories of Jane Austen, or the gritty realism of our greatest film-makers: Ken Loach, Mike Leigh, or Michael Haneke. Better still, put on your best pink bra and go and visit Gateshead, Winchester Cathedral, Crosby Beach or the Waters of Leith and see for yourself, humanity in all its grandeur and humility.

For all the Brer Creatures
born out of barreness,
Crafted and grafted upon the mind's eye,

Sisters of Myth,
the eternal fraternities
link the bright earth to the night's dark sky.

which singers and dreamers
and story-tellers create
to divert us from outer reality.

And what is truth (the Bible inquires)?
Adam himself evolved from a void,
and Eve a mere rib,

Ancient Elizabeth traced her relation
to Sarah, whose God-opened womb
housed the seed of our forefathers,

Forever and ever conceived in
immaculate miracles, bound
by unshriven sororel endeavours.

Who are the creators?
Blyton gave birth to a
fabulous family of 'creeturs'

she stole from the great Uncle Remus,
himself a mere mouthpiece
for some other orator;

And Aesop, the Father of Fabulists,
collected his stories
according to one simple truth:

There can be no Fables with humans alone.

Enid Blyton, whose genus
the Brothers Grimm shared, was
not so barren it seemed;

Nor Dogdeson, Lear, Graham, Potter or Milne:
Trapped in regression, they all knew
The existential story-tellers' truth:

There can be no good fairy tale without humans.

Whether Adam or Aesop,
Carroll or Grimm,
La Fontaine or Reynard the Fox,

Uncle Remus' or Blyton's brothers:
are not all stories pure fiction?
Or the yearning for purification?

Not so, since all the Brer Creatures,
are but the seeds of creative unconscious,
ripened by the moon's dark side.

So what of the Bible (truth inquires)?
Signs and symbols, birds and beasts,
primitive pictures in preference to man,

’til One pre-empted truisms' pact:
what lies between Old and New
exists between fiction and fact;

no fairy tale hero or fantasy-land,
He incited something quite modern.
And called it 'novel'
Posted by Tin Angel at 04:56 No comments: Links to this post