This month’s rant: The Edinburgh Question

Some years ago at a party, I got into a strange conversation with one of the guests. He wanted to know which school I went to, and when I refused to tell him, he became extraordinarily vexed. He continued to quiz me, and the more I dug my heels in, the more irate he became. It was actually quite amusing for the other guests, but not for him.
You might be wondering why I didn’t just tell him. In the end, I did, but he was too raging to even hear my reply, and so the whole charade continued. My stubbornness was due to my own question which is, why was he asking? Not so much, why did he need to know, but: why was this a question at all? I’ve since learned that there is something called ‘the Edinburgh question’ and this is what he was asking.
“What School did you go to?”
It’s quite different from ‘where did you go to school,’ in that it is an assumption that you went to a Private School and therefore, there is a pecking order at play. Edinburgh is so full of fee-paying schools it makes you wonder what proportion of its kids attend them, compared with those at ‘normal’ schools.
I could do some research, but frankly, I can’t be bothered. This is rant, not an essay. And because I went to a normal school (a common comprehensive somewhere dull and north of London, if that party-guest is still listening for an answer) I’m obviously not worthy of forming anything more than a common opinion. But this is it...
I abhor private schools. The idea of a separate education for some when we live in a society that has ensured the provision of education for all makes no sense. Paying for something that has already been paid for through the equitable system of taxation is absurd, and must surely detract (financially and philosophically) from all that is sensible about universal opportunity.
Furthermore, opting out of state-education is a double-scam, since private schools enjoy (ie, reap) the benefits of charitable status, to the tune of millions per annum in tax breaks. Class privilege, social segregation, and financial apartheid are subsidised overtly by the state. The Public School system sets up notions of privilege based on money. If you can afford the fees, your children can get something that those who cannot afford it will be denied.
This is not to say that all non-fee-paying schools are rubbish; rather, that in a society that values things entirely on their monetary value, ‘normal’ schools will always seem inferior. Of course we all want the best for our children... yes: we ALL wish for that. Placing people in a superior position won’t necessarily produce good results, yet the assumption that accompanies this heightened position is the distinguishing factor.

[photo By Kim Traynor - Own work, CC BY-SA 3.0, https://commons.wikimedia.org/w/index.php?curid=25839641]
It is that those educated privately are worth more. It’s on a par with saying that those who buy a certain cosmetic product (on the basis of vulgar marketing alone) are better people because they are ‘worth’ it. No: they simply ‘bought’ it, while the rest of us got by on blood, sweat, and tears. Or got by on hard work, study, and dedication.
These places are seen as efficient exam-machines, but even when they are not, they confer a sense of sophistication that can make a failure feel they have achieved: status is all they need. When they flunk out of education, mummy-and-daddy can always bank-roll them for a ‘mind-expanding’ gap year, or ask a friend to take them on as an un-paid intern while the parents buy a nice little bedsit in Pimlico. They don’t even need a passport. 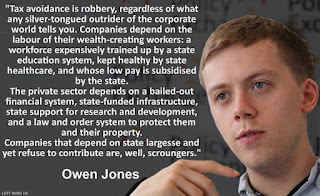 As I said, this is only a rant, but I have done some reading on the subject, and can thank Owen Jones for some of his insight (his book The Establishment is a continual go-to for me.) But to return to that angry, ranting party-guest who was so pissed off when I refused to be defined according to my education, I think the overall factor was that he was judging me according to the way I speak.
Yes, I have an English accent which, for someone living in Scotland, immediately suggests that I am ‘educated’ – which implies ‘privately educated’ – especially because my pronunciation is pretty ‘received.’ Or, as some would perceive, ‘posh.’ This is because I trained myself to speak ‘properly’ – that is, with clear tone, good enunciation, and proper support – so that I could sing better.
I honed my vocal skills working on the checkout of a certain famous supermarket, earning money to pay for my Music College education. As I’ve said before on this blog, my voice defines me as a person; it is what I am, and anyone who wants to judge me for it or according to it, or make assumptions when they hear it is a fool. It makes no difference what school you went to or where you went to school: if judgement is your only tool, you are an ignorant prick.
I want to end this rant on a positive note, and can’t decide whether to quote Michael Moore and his findings on the Finnish education system (in Finland, fee-paying schools are almost unheard of, along with homework, and hitting kids – but I’ll come to that next month) or a piss-take of posh people. Actually, I can decide: it’s a no-brainer.
[]
Posted by Tin Angel at 11:16 No comments: Links to this post