Writing is hard. I say this for anyone who reads this blog and isn’t a writer, although I suspect that most of you who read this have some kind of creative impulse. What creates this urge is beyond me. I cannot imagine being without it. Creativity is everything to me. Art, in its many manifestations, is something of a religion; my need to be creative comes out of a compulsion which feels like an addiction.


Why do I do it? I find it incredibly difficult and frustrating. I’m never short of ideas, but the fear of trying to articulate these thoughts in well-crafted lines of prose, poetry or script is crippling. I cannot accept that I have the talent, craft, or ability to get words to do what I want them to do. Then there’s the matter of taming my pen so that I do what every writer ought to do: leave rabbit-holes for the reader’s imagination to disappear down.


One of the chief aims of my writing, as I suggested in my wee blurb for the Village Pub Theatre is to ‘mess with the imagination.’ My short play, wonderfully interpreted by Jenny Hulse and Liz Strange (dir. Caitlin Skinner) was designed to leave the audience thinking, ‘what was that about’ – although it may be that the mystery was shattered by the rendition of ‘Happy Birthday’ sung at me immediately afterwards. Very touching, if embarrassing!


My story Alice (and) the Elephant is another peculiar piece, open to a wide range of readings. Maybe people who know (or think they know) me will see it as autobiography – albeit disguised or transposed – but I can’t say that it is. A writer cannot see his/her hands. (That statement works both ways: lead us not into writing rubbish, but deliver us from the rubbish we write, since it is Thy will that is being done.)


Presenting my story at Illicit Ink at the beginning of this month, I had the luxury of sending a recording of my reading to a dance-artist to create a new twist on the tale. I didn’t know Janine Melanie Wyse; we met only the day before for a coffee. But I knew from this brief meeting that, with her unique take on my work, it was going to be very good. ‘Whatever you come up with,’ I told her, ‘it will be great: it’s completely up to you.’ And it was.
Beyond my wildest imagination. 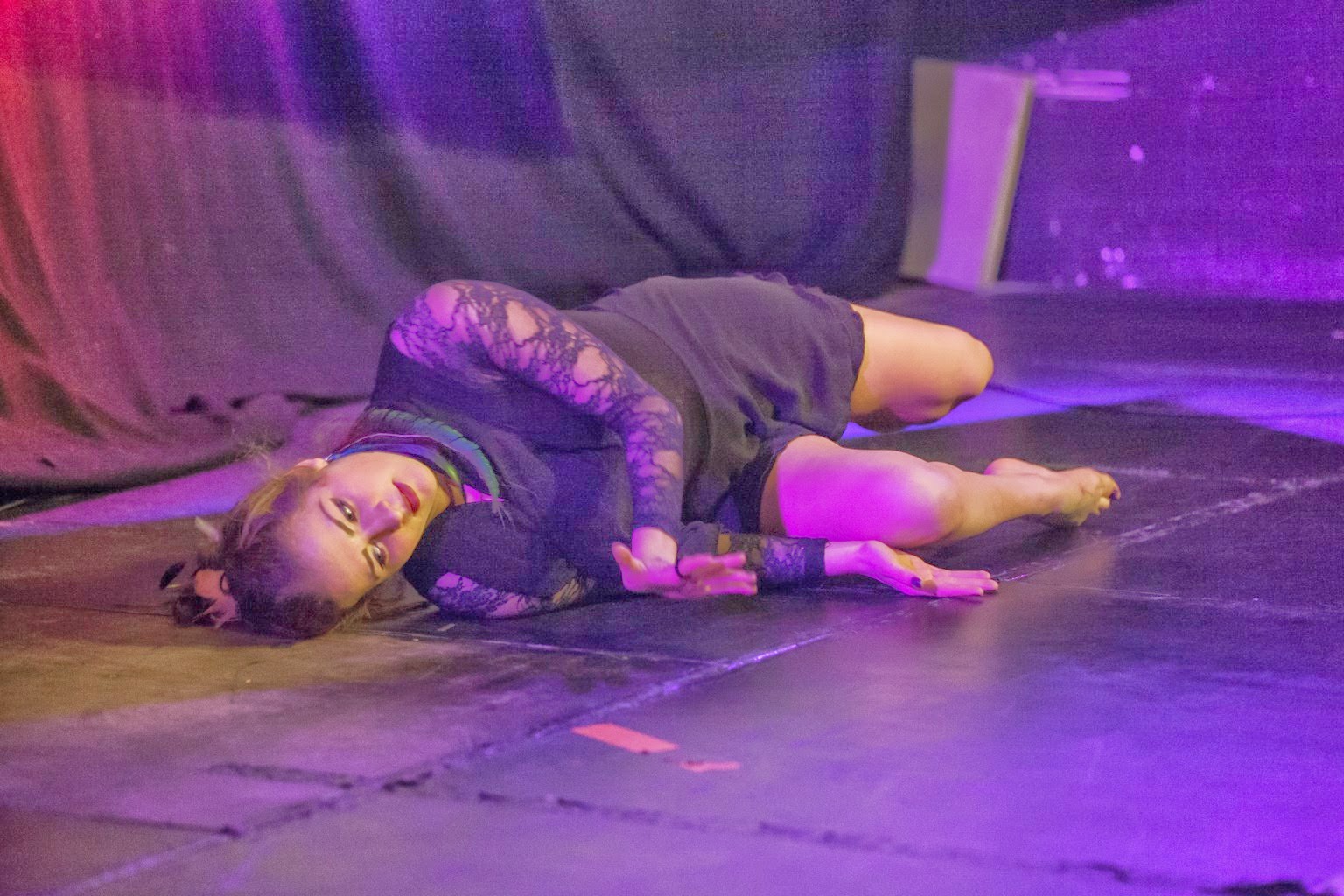 So it is with these obtuse little pieces which I have called ‘cautionary tales’ – whatever they may or may not be about is not for me to decide: it is in mind of the beholder that the meaning must be construed. I’ll let you decide what you think Poppadum Poppy is addicted to. Whether you are right or wrong this is something over which I have no control, and that is fine with me.

from Charlotte & The Charlatan

– and other cautionary tales

‘I have to admit,’ Poppy admitted, ‘I’m partial to a poppadom or two.’ The Charlatan knew, though Poppy showed no clue, this was only a partial admittance. ‘I spend a small fortune on pickles,’ she said – which the Charlatan knew was entirely true: comparatively, it was a pittance.
Poppy’s passion for curry ran rather beyond her purse. Sometimes she could spend a week’s wages – or worse – on ready-meals, take-aways, or home-made curry – if she was not in a hurry. Sometimes she would splash out and dash to a curry-house, then order enough for two. Quiet as a mouse (although looking a little bit sad) at the end of the meal, took the left-overs home in a doggy-bag.
If Poppy had a dog, or a human companion, perhaps her poppadom fetish might not have been spotted (let’s say, they’d have guessed it, unless she somehow suppressed it.) But poor Poppadom Poppy was more than besotted.
She first let it slip when a mint raita dip was found at the back of her desk drawer at work. She’d taken to taking in poppadom crisps as a snack. The Office-Bore smirked: ‘Most women smuggle in cucumber!’ Nobody laughed, or understood the joker, but Poppy kept her face the most poker.
From that point, Poppy kept her poppadoms clandestine, preferring to dine alone. But the Curry Club on a Tuesday at her local Wetherstones Pub was another public outing. If anyone ever suspected a secret desire, what they saw was beyond any doubting. From noon right up until closing time she had poppas and dips for £1.99. If she wanted to ‘add a desert’ to her plenty, an ice-cream kofte was two-pounds-twenty!
But this behaviour the Charlatan saw (and so did her boss, and the Office Bore) was the thin end of a thickening wedge. ‘Poppy,’ he said, ‘Can I offer a pledge?’ At this point, the Charlatan, seeing her frown, frenetically started to search around for a corny rhyme such as Balti with faulty, Korma with calmer, Jalfrezi with crazy or Chutney with Muttley. (That last one he knew was a little bit crass, but he shitted it out like a chicken Madras.)
‘Dear Poppy,’ the Charlatan said, sympathetic, ‘Can I offer advice you might find empathetic? For years,’ he alleged, to curry opinion without any flavour, ‘I have struggled and striven to overcome passions by which I am driven.’
So she went to a Group where the folk helped themselves (not to curry) to self-help books not on the shelves of the average bookshop or Grocery Store. But after twelve weeks (or steps) she wasn’t sure she had overcome her peculiar predilection, which everyone saw as a dreadful addiction.
While the Charlatan thought he was onto a winner, to pardon the sin while forgiving the sinner, the truth about Judgement cannot be revoked: there will always be fire when you sniff out the smoke.
The fact is, she wasn’t addicted to curry at all; a far greater contagion held Poppy in thrall.

Getting Out and About

So that’s February done – thank fuck for that. It’s been mercifully short but unremittingly shitty for me. I’ve been treading on eggshells and other clichés; the skeletons in my closet have been rattled, and the cachinnations of the mad woman in the attic have cackled in my ears.


Having to acknowledge the Elephant in one’s Room is hard, and while my skin is pretty thick, I could do with an elephant’s hide.


There is good hide and bad hide. Though it is tempting to hide away when feeling vulnerable, I must not. What’s more, I mustn’t stop writing. Writing is the only way I know to make sense of my own difficult past, to challenge perceptions, and to try to understand the strange and harsh world we live in.

For the first half of March, I fully intend to get out and about, and share my writing with the world (well, the audiences of Edinburgh at least.) To begin, I will present one of the Cautionary Tales that I am posting on this blog this year. You’ll find it below – although the performance at Illicit Ink's 'Underground' show will be accompanied by music, and interpreted by a dancer. Exciting!

In the week, I’ll read at the Antihoot in Henry’s Cellar Bar; then the Inky Fingers Open Mic at the Forest Café; and will perform a grisly phone-box tale at 10Red The following week I’ll appear in a slam (if I’m picked out of a metaphorical hat) and at the University's 'Soap Box.' At The Blind Poet, I’ll recite poems printed in two of the three Blind Poetics Collections, the first of which you can see here. http://issuu.com/blindpoetics/docs/final_jan_13


The first fortnight ends with my birthday, which I intend to celebrate. That evening, the Village Pub Theatre will be presenting short plays by writers new to the V.P.T. Although it’s not strictly true that I’m new, having had my twitter-plays performed there and at the Lyceum (oh, yes!) my sketch, Taboo, will clock in at an untweetable 8½ minutes.


We all have elephants in our rooms; all have difficult issues and taboos, and there are plenty of things we’d rather were left unspoken. But the important thing is dealing with it when the silence is broken. The turret window’s open.

Come talk to me.


Alice (and) the Elephant

from Charlotte & The Charlatan

– and other cautionary tales


The elephant in Alice’s room was huge. It started out tiny, a micro-pet, but rapidly expanded. Like Alice’s propensity for fantasy, her elephant grew into something of mammoth proportion. Its trumpet-call went from playful ‘toot’ to a blast of brassy distortion. A boisterous calf, the elephant took up half the room; pretty soon, with increased sloth, the creature became a behemoth and finally, eventually, the elephant filled the room.


Alice allowed the elephant to fill her room. Like the wild and untamed ramblings of her mind, the elephant, in concept and metaphor, ballooned into a fantasy beyond the obvious and blatant fact: without the room, there could truly be no elephant. But without the elephant, could there truthfully be a room? Alice doubted this.


And so it was, the elephant became the room. And it was so, said Alice to the elephant: the room becomes you. It’s hard to say if this pleased her. The elephant eclipsed all sensibility; to deny its existence was futile, yet it was argued by those who attempted to do so as a childish conceit and puerile. Alice ignored the dissent, since such opinions came and went but the elephant remained.


Lo, and indeed, behold, Alice became the elephant in her room. Of its real presence, everyone else was aware. If only they could convince her – Alice – that it was really there.             For Alice had put aside her script and developed a hide so thick that neither fear nor sub-text could penetrate or allow her to hear the voices that had deluded her. What lay beneath her cutaneous surface was eluded – to overcome this ‘that which can’t be spoken’ – by a silence that would never again be broken.


When she became the elephant in the room, Alice became both elephant and room and as such, no longer existed herself, though her name lived on like a promise with which memory could commune. And as we know, the elephant never forgets.


As to who begat the elephant, only Alice knew. It began as a pet, a myth, a turn of phrase. It turned into a set of values, a concept – a phase. It became a matter of reproof, beyond proof of the truth. Alice was the creator, myth-maker, the reality; the viewer, the viewed, and the human fantasy that any of this exists beyond the bounds of what lies hidden, hiding or buried by or in perverse imaginations.


Alice and the Elephant in the room.


The elephant in the room.