It’s been over a month since the end of Edinburgh’s Festival Fringe, and I’m still experiencing that ‘never again’ hangover feeling. This year was one of my most stressful festivals, but there were many worthwhile moments that leave me wondering if ‘never’ really means that.


One of my friends, who wrote and performed in her own play about homelessness, said to me after, “Why do we do this to ourselves?”
Good question!


Having produced, presented, and performed in two shows – one, a single-shot, the other, a 22-night run in a theatre, plus a bunch of one-off appearances – I was physically, financially and emotionally exhausted.

As my friend put it, we “underestimate how vulnerable we make ourselves when producing our own work...in every single way.”


I’ve been performing for many years, mostly as a musician, and I’ve also had my own work – words, and music – performed. In the past six or so years I’ve focussed on performing my writing, which has been a very different experience. In the last year, I’ve pushed myself well out of my depth.


A year ago, one of my photographs (from my sequence called Walking on the Water) appeared in an exhibition in an abandoned train tunnel: possibly the most ‘public’ exposure my art has had, outwith the internet (which is a nebulous measure of publicity, especially since no-one reads this blog anyway.) 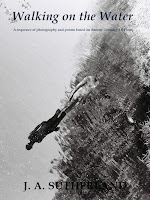 Then the full set of photos, with the accompanying poems, was hung in an exhibition in a local Gallery. Although I have often performed Walking on the Water, and have exhibited the pamphlet with the photos at many art fairs and festivals, having my work on the walls of a fine art exhibition was a different thing.


I felt denuded, seeing people peer at my pictures and poems while I stood buy, watching them pocket the pamphlet (ignoring the £5 sign,) pondering over what they thought of my ‘art.’


It was like being back at Music College, at the student composer concerts, where we had to answer a barrage of questions and criticism after having our pieces performed. It took a thick-skinned student to take the Pontius Pilate approach and say, “What I have written, I have written.”


Composers, like playwrights, have to ‘let go’ of their baby if someone else is to perform the work. But writers, once the page is printed, have to live with whatever the public make of their published piece.


Art that is ‘live’ exists in a very different way, as I discovered at this exhibition. There was a strong emphasis (especially on the opening and closing nights) on ‘performance’ art, and on the quiet afternoons, when I assisted as an invigilator, the life-drawing sessions had an aura of serenity that transcended the vulnerability that I supposed the models might have felt.


Or was I projecting my own anxieties?


I was particularly struck by the work of one artist. Among the various portraits was a painting of herself, nude, aged 23 years minus 8 hours 17 minutes, and pictures of her friends, family, lovers, flatmates, each of which had a scribbled note underneath describing her relationship with that person. Intensely personal to the point of voyeurism. Yet this artist seemed to have no foibles over making herself vulnerable though her art.


Her part in the life drawing sessions and performance elements demonstrated how she was prepared to – literally and physically – bare all. This might have been an exhibition, but she was no exhibitionist. With this artist’s name being a semi-precious stone, I was inspired to write a poem based on all she gave to the exhibition, which was called, Shapes That Shift Desire.

You bare your soul.


In every portrait that you paint


not a physical reflection


but a subtle illustration


through which you bare your soul.

You bare your life.


more than just a simple caption


but, revealing with the action


of a surgeon’s knife, you bare your life.

You bare your body.


You portray yourself but hours


and minutes prior to your turning 23;


balancing maturity with this naïve


depiction of what you are about to be –


or are already, possibly –


for now, you bare your body.

You bare your all.


Wholly, fully comfortable, at one;


contented with the skin you’re in.


Let others take the shapes that shift


desire or lust, envy or temptation:


you are a precious celebration


of the ever-changing gem


is captured and reflected


when you bare your all.

You bare your soul, your life,


your body, and your art


and in doing so, you bare your art,


your body, and your life:


you bare your soul.

Less than a year later, preparing to perform Walking on the Water for one of the shows I was producing in the New Town, the influence of Topaz – and various other artists – came into focus. A friend of mine (I’ll refer to her as ‘Rachel’) who had contributed to my Charlotte & The Charlatan project in more ways than one had expressed a desire to perform in our production. But with a twist.
She wanted to sing her songs naked.


This request wasn’t about exhibitionism either. Besides being a great singer-songwriter (her songs are open, honest, and sometimes, painful expressions of vulnerability) ‘Rachel’ is also an artist who uses naked self-portraiture to express what it is to be human, with all its flaws. She has performed her songs un-clothed before, so this was nothing new (to her.)


Yet I needed more reason, in the context of our show, to have a nude performer. I figured how my Walking on the Water sequence is based on statues of a naked man: the Antony Gormley statues that once stood in the Water of Leith. In one of the poems, a woman comes to view one of the statues every day, and one day, does something extraordinary.


LOVE bade me welcome; yet my soul drew back


Guilty of dust, and sin.


From my first entrance in,


Drew nearer to me, sweetly questioning


If I lacked anything.

I called her Dawn –


although her name was Maudlin.


Every day she greeted me;


as the morning-star twinkled


she sprinkled the waters


with the ointment of her eyes.


The wind whipped through her skirts,


making havoc of her hair.

I fixed my stare to where she stood,


up on the walkway by the railings,


lone voyeur to her solitary stance.


She ebbed towards the bridge,


climbed over, picked along the nettled bank.

In the corner of my eye I saw her


then behind my back, draw nearer to me.


I asked myself: what is this thing I lack?

I could hear the plop of pebbles


as her tears dropped in the pool;


the first stone, then another,


until my feet were blessed with


the precious unction of her heart,


the perfume of her penitence.

Wrapping her pale arms around my chest,


up against my legs, she pressed her soft breasts


into my unyielding frame; her long hair flicked


and wiped away the moisture from my eyes.

Still blind, I asked myself again:


was this the thing for which the Seraphim


She drew back, no longer full of dust and sin.

So I invited ‘Rachel’ to re-enact this scene theatrically during my performance of the sequence, and after that, to come back on stage and perform a set of songs as she was, au naturel, as a natural segue. She agreed. After getting the go-ahead from the theatre, we spent a considerable amount of time discussing, interpreting, and rehearsing in preparation for the piece.


Being a late-night show, advertised as ‘containing nudity,’ there was a rowdy element at the rear of the auditorium. The show began with our host singing a song that we figured would be an appropriately thoughtful. After he introduced my act, I walked barefoot through the audience reciting the epilogue, aware there was an ‘atmosphere.’


When I sang the first part of the psalm that weaves though the sequence, in Gregorian plainchant, the ‘lads’ at the back began to giggle like silly school boys. Though fully focused on my performance,  I saw the guy from the sound-desk go up to them and say, “shut up, or fuck off.”


Since they were there for only one thing, they chose the former option. But they didn’t realise they were, unwittingly, immersed in what was happening on stage. My poetry was all about them. During the sequence, the narrator tells how he is abandoned and mocked; how he has to accept that his ‘self’ is more important than the shadows and reflections that surround him. 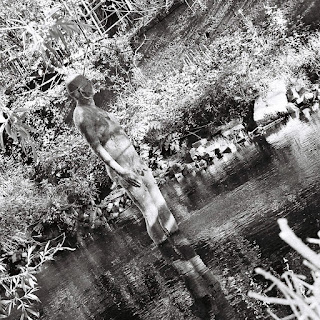 The central poem is about how repentance, love, forgiveness, and self-acceptance set you free. As I introduced the character, ‘Dawn’ (although her name was Maudlin) ‘Rachel’ walked out of the wings and, with our eyes fixed, she moved downstage, across the audience, then walked up behind my backed and stripped. After embracing me from behind as I continued reciting the poem, she then drifted silently off stage.


I completed the sequence with the final poem, about the way that, despite all the shit, we are all part of creation and are loved. I delivered the lines, I heard my maker’s voice, and he was pleased, right at those people who, because they didn’t know what to expect, or how to deal with their discomfort, had giggled like children.


It was one of the most daring, edgy, and engaging performances of spoken word that I have ever participated in. I suspect that the rabble at the back, nor the stunned audience at the front, had seen anything like it. Whatever they thought, I only hope that it did, indeed, make them think.


When ‘Rachel’ then came on stage with a guitar slung across her naked body, she performed the most intimate song-set imaginable. Despite her self-deprecating humour, I couldn’t have staged this without her intensely serious participation. Nor without the influence of Topaz and all other artists who dare to bare their all.


But more persuasive than anything else was a short video by David Bowie.

Had I not seen this, I don’t think I would have dared to wade far deeper into the water than ever before. Walking on the Water may not be everyone’s sort of thing, but that doesn’t matter. I wrote it as much for myself as for those who see fit to judge and ridicule me, my work, and my life.


To return to my friend’s question, “Why do we do this to ourselves?” the answer, I think is this: Honesty. I have often cited “Art is a lie that helps us to understand the truth.” I could get into deeper waters by asking Pontius Pilate’s question, “What is Truth?” Instead, I’ll use his other famous line...


This is only a blog, but I must press the ‘publish’ button. Once the page is printed, you can make of it what you will.
Posted by Tin Angel at 15:14 No comments: Links to this post