Around this time two years ago a friend of mine died, suddenly, unexpectedly. We had fallen out of touch; his work had taken him far away, and I had moved away from full-time music-making. We initially came to know each other through doing concerts and recitals. Sometimes we would get together simply for the pleasure of making music; entertaining friends, neighbours, or family.


When I first visited his house, I discovered he had a daughter of around eight years old. She often sat in on our rehearsals, learning the songs (the English ones) by heart.  She spent some nights with her father, but lived with her mother, a short distance away. This arrangement worked reasonably well until the mother voiced plans to move to the south of England. Naturally, the father objected.


Because the two parents were never married, the child’s father had no official parental rights and responsibilities. He took his ex-partner to Court to prevent her from taking the child to the opposite end of the country. Things get messy when resorting to legal action. Ian McEwan, in his novel The Children Act, described the children in these sorts of cases as


Counters in a game. Bargaining chips for use by mothers…the pretext for real or fantasized  or cynically invented charges of abuse, usually by mothers, sometimes by fathers; dazed children shuttling weekly between households in co-parenting arrangements; mislaid coats or pencil cases shrilly broadcast from one solicitor to another.


The poor girl became a pawn in the parental wrangling; accusations were made against the father – all entirely false – and the Courts refused the father any parental rights and responsibilities. He was ostracized from his daughter. It broke the man’s heart. And although he was active and fit, his heart gave in: something took his life as cruelly and abruptly as his daughter had been taken from him.


At the reception after the funeral, I learned that the daughter had been invited to attend but on the strict condition that none of her mother’s family should be there. By then, the daughter was just months short of her 18th birthday. She was offered a chaperone. But, unable to make her own decision, she was prevented from attending her father’s funeral.


Whether she will regret that for the rest of her life, I’ll never know; nor will I know what she felt or thought about being removed from her father. Years ago, when I was running a music event, I saw her in the audience with her friends. I went up, said hello, asked how she was; said it was lovely to see her. As I moved away I heard her proudly announce to her friends: ‘My dad plays piano for him.’


Her mother fed her lies, just as anyone who wants their own way can make up stuff and manipulate the innocent. The method was wrong (what do the Courts know?) but the reasons were simple: love. Both parents, no doubt, loved their daughter and wanted what they thought best for her. But the love of two parents should never become a competitive wrangle. Sadly, however, often it is.


Besides being a fine musician, my friend was a highly-respected G.P. and also, an occasional poet and playwright. At the time of the Court case he wrote a ‘triptych’ of radio plays that were given a live public performance which I produced. It was a quirky, entertaining, and moving piece of work that presented all sides of the story in a far-more balanced way than the Courts ever could. 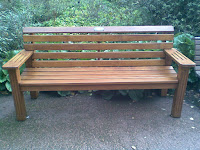 Art tells the truth, the whole truth, and nothing but the truth. Except, it does so through a lie.


Recently, walking through the Botanic Gardens, I saw a new memorial bench. I was not surprised to see that it was dedicated to my friend: somehow, I felt drawn to it, as if his spirit, his memory, and my part in his story drew me towards the dedication on the brass plaque. I sat and wrote a poem. It seemed the obvious thing to do. The title seems obvious too… it is the title of my friend’s play.


I will preface it with a related poem from a previous post on this blog.


In Years to Come


You kept it hidden from me; even so
I sensed it long before you knew.
My chief regret: I never saw you grow,


I never saw when you started to show;
never got to paint the nursery blue.
You kept it hidden from me; even so


you told me. Exactly why, I’ll never know.
Left to my imagination, naturally I grew
my chief regret: I never saw you grow.


My banishment from you, a heavy blow,
yet separated, still I felt a part of you:
you kept it hidden from me; even so


I suspected you would bloom and glow
and so as time ticked on, each day renewed
my chief regret: I never saw you grow

or got to choose a name but, even though
I had no choice, I saw it as a gift to you;
you kept it hidden from me, even so.
My chief regret: I never saw him grow.


If you could spend an hour on a bench
with anyone living or dead, who would it be?


I began to notice benches when a friend
posted a status on her Facebook page.
‘If you could spend an hour on a bench
with anyone, who would it be?’ I replied,
‘Well you, of course.’ I proceeded to send
her pictures of specimens: contenders;
benches rotted by rain, warped by winter,
sunned in spring, tatty, peeling, august,
painted pink, tarnished, or red with rust.
Unfortunately, she left our beautiful city
before I had the opportunity to share
that precious hour with her; drinking from
our flask of tea, putting the world to rights.


Wandering through the Botanic Gardens,
this memorial bench catches my sight…
I read “Beloved” on the inscription.
Then almost without closer inspection
I see the name of someone I knew well.
Fellow musician, poet, playwright… friend:
you died too suddenly and much too young.
Guilty that we’d fallen out of touch,
I sit on your bench, alone, feeling
like a trespasser, remembering
recitals and concerts we used to give –
I sang Lieder and English Song; your sensitive
piano accompanied my subtle baritone.


A robin joins me on the bench, and with
a high-pitched ‘Cheep! Cheep!’ attempts
to claim its territory with a delicate staccato.
I greet the bird, enamoured by its sweet tone.
A recollection comes tweeting back to me;
how on another bench, when we performed,
a tiny, piping voice would sing along
to my rendition of the Songs of Travel.
As Robin hops onto the floor, I stand
my ground and, letting this thought unravel,
figure I belong here on this bench.
You who were belovéd never saw
your daughter into adulthood. What’s more,


being denied the right to call yourself
her father broke your spirit – and your heart.
I share with you a sense of grief and loss.
But justice isn’t based on what is fair;
less so on fact and even less, on truth.
You were a parent to the child you bore.
Imperfect – yes – perhaps, but aren’t we all?
My child exists, although I also never saw
him grow. Like you, I only loved too much,
and seeing love not lost but stolen was a wrench
that licenses the reason for this bench.
I sit here, contemplating for an hour
a man who showed how love can overpower.


Posted by Tin Angel at 12:36 No comments: Links to this post