A total eclipse of The Sun?

Yes, it’s Polling Week yet again. And yet again, we have a rigged election called by a corrupt Government, led by an unelected Prime Minister who has lied and cheated her way through her entire campaign – simply because she can. At least, that’s what she thinks.
The real truth (not an expression familiar to politics) is that not only will many have seen through her sleight of hand machinations, but also, her shambolic behaviour has highlighted what strong and stable leaders we have among the opposition.
Even if the Tories still get in tomorrow, I only hope they’ll have lost enough seats to de-throne that sour-faced puppet from her self-constructed position. For the first time in years, we might have a decent, socialist opposition – although what difference that will make to Scotland, who can say?
I prefer socialists to Nationalists any day.
Anyone reading this from beyond the United Kingdom may be wondering what my little rant is about, since I’ve mentioned no names, nor have I been explicit about political parties – except the ‘Tories’ which, for me, has always been a generic swear-word since the 1980s when I first became aware of politics. 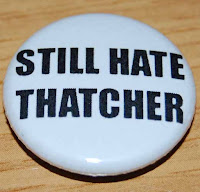 Well, that’s less vague, name-wise! Perhaps it’s facile to pin everything onto Thatcher’s legacy. However, I saw a post on Facebook recently which ran like this:
Overheard at the bus stop:

Elderly woman: "Who are you planning on voting for?"
Elderly man: "The Conservatives. I've been a home owner for a very long time and I'm not going to let a bunch of young liberals steal my house."
Don't worry, there's no way any of us are going to be able to afford houses.
While I can’t even start to question the Elderly man’s logic or rhetoric, I have to remind him that it’s the Tories who have stolen pretty much everything from the ‘liberals’ as he calls them. It started in the 1980s, and continues today, with the crippling of public services.
From my latest set of sestudes (62-word studies) reflecting on the symbolism of doors, here are two that sum up what I feel at the moment. First, this door           (No. 13 – unlucky for some?) on a housing-scheme:
from 26 Doors Between My House and Yours... 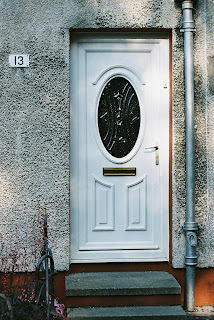 In 1980’s Britain, Thatcher’s
Government sold off
the Social Housing
to the Nouveaux Riche,
for little cash.
New front doors appeared
on Housing Schemes –
symbols of new-found wealth –
while the Lumpen Proletariat
remained in ill-health, socially,
financially, domestically.
Unluckily for some,
the markets crashed….
As we guessed, the poor
remained the same,
Tories prospered,
while the rest, dis-enfranchised,
had their homes re-possessed.
For the next door in this sequence, I have a newsagent’s shop with a bright red lintel. While there are websites such as https://www.tactical2017.com - giving voters a directive on how to oust the Tories (which, in Scotland, means voting SNP in almost every ward) the fact remains that too many ignorant people cast their ballot according to the bullshit they read in the papers.

Filthy, shitty lying rags like the Daily Mail can print what they like; The Sun will claim it won the election (whether a Tory or New Labour Government is elected – it is a fickle piece of shit) and as for the News of the World or Evening Standard – don’t get me started!
Ever since the Hillsborough disaster, it has been nigh impossible to buy The Sun in Liverpool (the subsequent enquiry proving unequivocally that this toilet-paper lied through its tabloid teeth.) Two weeks ago, after a disgracefully insensitive front page after the Manchester attack, a similar boycott was mooted.
I wonder what it will take to get every newsagent in every major city throughout the nation to refuse to stock every nasty red-top publication.
Ben’s Newsagent, Pleasance 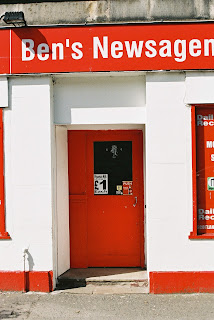 Not because it isn’t convenient,
nor may sell what I need
from morning ’til night…
Nor because it’s local –
on the proverbial street corner…
Nor because of religion or ethnicity –
this is not a problem to me…
Nor because adverts lure
me to purchase something
I’d not bargained for… No:
I refuse to enter this shop
because it has a Red Top.
This Thursday I will do my bit by voting (tactically?) according to my conscience. And every day I’ll do my bit by never reading a tabloid newspaper. That said, you can’t trust anything you read in any paper. If you do, you’re probably not fit to vote.