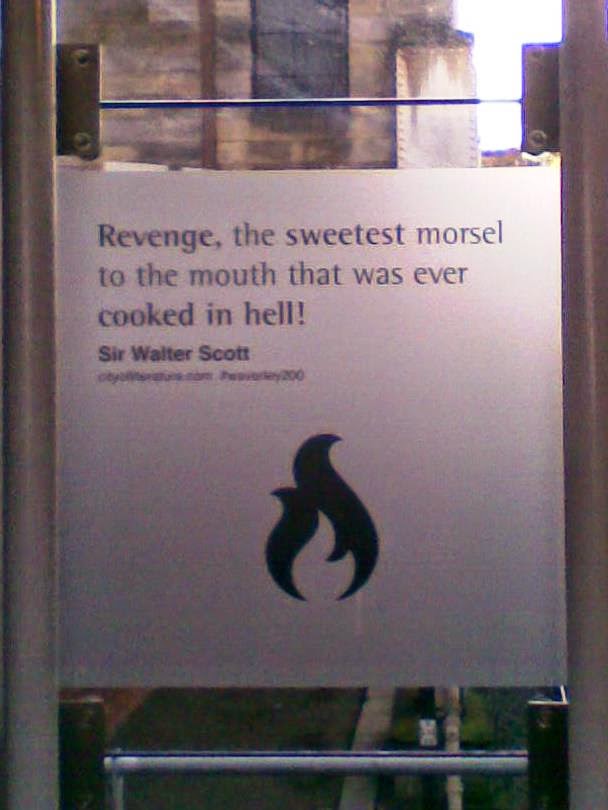 Recently I wrote a short story about revenge. It was one of those pieces where I tried to cram too many ideas and influences into 3000 words, so it probably won’t get published (in which case, you’ll see it on here some day!) The starting-point was a Walter Scott quote which can be found in the railway station named after his writing.

Scott uses ‘sweetest’ here with bitter irony: revenge is hurtful, dangerous and damaging. When meted out on someone with an already broken life, the effect can be devastating. My short-story began as a curious tale about yarn-bombing. The walking-statue of Robert Fergusson was decorated a few years ago (so this part of the story is true) with a pair of woolly leg-warmers. In my piece, the guerrilla-knitting continued in a more sinister vein, as an ex-lover used yarn-bombs, street-graffiti and finally, photographic means to defame the person who had – so the story claimed – done her no wrong.


The final influence for my writing was a form of revenge that I, in my naïveté, wasn’t even aware was a ‘thing.’ There is a video on this which I urge you click on here before you read on. https://embed.theguardian.com/embed/video/commentisfree/video/2015/jan/21/naked-pictures-this-is-what-i-did-revenge-porn-emma-holten-video


Scoring revenge-points when love goes wrong is a cheap nasty thing to do, especially when that lover has done nothing unpleasant to you. That’s assuming there was any love there in the first place. If all a person wants from a relationship is sex, then love is disenfranchised from the start. And anyone who preys on another person in this way is pretty low.


Posting this on February 14th may seem churlish, but I want to pick up on one thing from the video. 10% of this sort of revenge mentioned is carried out on men. That’s a significant proportion. I don’t want to bang on about victim culture here, but it seems that we can all be vulnerable from time to time, and must defend ourselves from unscrupulous people.


This month’s Cautionary Tale (again, not exactly celebrating St Valentine) is about someone who, through trying to be gregarious, chatty, and friendly puts herself in danger. When a person demonstrates good nature, whether they are a woman, a man, or a mouse, no-one has the right to take advantage of them. My mother used to say, “Two wrongs don’t make a right.” To avenge someone who has done nothing wrong to you makes you less than wrong. It makes you amoral.


I’ll end with a more pleasant conclusion. Last week, a different sort of yarn-bomb adorned the Robert Fergusson statue. It was not just a scarf, but an anonymous act of altruism, enough to melt anyone’s heart. Next month’s story is another Tale of back-fired benevolence, but one that I hope has a happier ending. But here, while I’m being utterly un-romantic, is this month’s amoral misery. 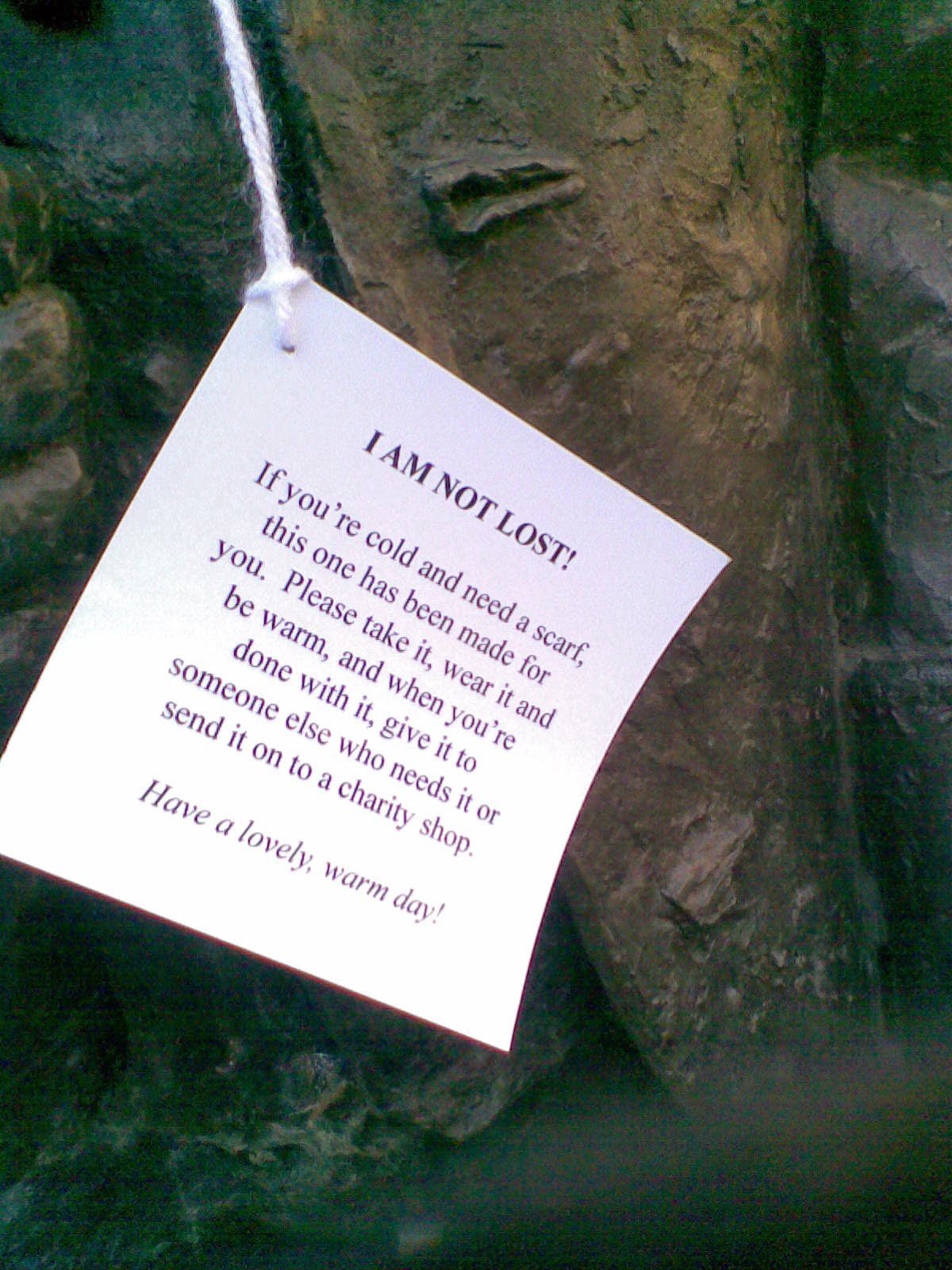 from Charlotte & The Charlatan – and other cautionary tales

Deborah Dangermouse, Dangermouse Debbie, was hell-bent on putting herself at risk. She’d court conversations with total strangers, stickily stirring up situations like a wooden spoon beats up a chocolate-cake mix; whipping up turbulent salutations like egg-white puffed up with a whisk.


Dangermouse Debbie cared little for safety, and less for her health; she’d strike up a sentence in mid-conversation, having seemingly picked out her victim by stealth. Bashful and meek, she’d be walking alongside the man in the street, then suddenly pipe up: her little voice giving her co-pedestrian minimal choice. An instinct to overcome reticence, she did this with alarming lack of defence: one minute, quiet-as-a-mouse, not a squeak, then mid-sentence they’d find themselves haplessly having to speak.


Debbie did nothing through malice or evil intent; her innocent banter came out of a simple desire to be friendly. Fed up with spending too long in the house, cooped up like a chicken, a hermit holed up in a cave, starved of company; a church mouse without any family; a domestic rodent without a cat, all Deborah Dangermouse craved was the chance of an innocent chat.


Where was the danger in that?


In the pub, in a queue, in the street or a park: wherever everyday people meet and engage she’d hover and pluck subjects out of thin air: Dangermouse Deborah just didn’t care. For Deborah, danger was so little bother and not a concern, she’d prattle in full-flowing waffle before her poor victim knew what they’d let themselves in for.


At the bus-stop: The 34’s always late – I got stood up once, on a date – do you know how they work out the timetables – and she was off, full-pelt, non-stop. Woe-betide the passenger who got on the bus with Deborah: the assailed was pinned down to a lengthy, unwanted discussion until he or she reached her stop.


In the disco: This is my favourite tune – last night was a full moon – did you know there are seventeen moves that are grooved by your average dancer – and before they had the chance to shimmy away or turn their back, Debbie would get them to listen to her full repertoire of fascinating chat.


In the bar, she’d sidle unsuspected up to middle-aged men who were more selective about who they drank with. ‘I’m Mouse,’ she’d announce, ‘But you’ll probably call me some other name.’ (She got “Mouse” from a worrying mother, who protected her strictly from dangers, warning of single-men, weirdoes and strangers.) All the same, within seconds, Debbie was up to her tricks.


She’d been accosting unsuspecting folk ever since she was six; by twelve she knew she had greater allure, and by 24 she had plenty in store for the gibbering drunk or colossal pub bore. Her loosening tongue and her loquacious banter created a thirst, for which one opportunist (he won’t be the first) provided a goal for her ultimate danger.


Oh, Dangermouse Deborah, didn’t you think to look closer at what that man put in your drink?
Posted by Tin Angel at 16:09 No comments: Links to this post