And so, I reach the end of this year’s sequence of sestudes.  I have spent many hours wandering around the Museum of Scotland, reading up on each object in the Research Library, and sitting in various nooks to scribble in my notebooks as inspiration struck.


I even visited the Collections Centre in Granton (on Doors Open Day) where there are a million-and-more pieces of treasure that haven’t made it into the Museum.  Maybe I’ll write a sestude or two in the future. I don’t think I’ll tackle a full hand of 26. 62 words may seem an easy task, but in fact it is a challenge – and a discipline.


For my final piece, I chose something that wasn’t there, that doesn’t exist. For the entire year, tucked away in a corner was a case that was, as the label said, ‘awaiting completion.’  As far as I’m aware, it remained empty, incomplete all year, giving me a concluding idea.

I’d like to end by thanking ALL the staff and volunteers at the Museum for the job they do.  It is a National Treasure, of which we all, whatever our background, politics or perceived nationality, should be proud – and visit as often as possible.

Delicate as a coddled egg in my white-gloved
hands I place the future into an open kist;
a seed, an infant soul, an empty book.
Unpreserved memories-to-come, to reconstruct,
to renovate from un-materialised artefacts:
friends I never had, lips un-kissed,
the unborn child, lovers lost or yet un-loved,
conserved for now at least from reminiscence: this
is what I haven’t written. Look.
Posted by Tin Angel at 08:19 No comments:

All this year, I have wandered around, stood still, listened-in, watched, observed and taken note of the many comings-and-goings-and-stayings-still in the Museum of Scotland. Over the months, I have chosen twenty-six objects on which to write a ‘sestude.’ 62 words, 26 Treasures, 12 months, 52 weeks: all meaningless numbers, really, but 1,612 words of poetry is no mean feat!


Naturally, I chose more than 26 objects – it was a hard task sticking to the number – and in all cases wrote many drafts before whittling each piece down to the requisite number of words.  But my eventual choice was by no means arbitrary.  I wanted to write about what it means to be Scottish when one is not.  And yet I don’t know if I can. Because? I don’t know if I am, or not.


Scotland’s incomings and outgoings have long been part of its history, and make up its tartan tapestry: diverse, unique, and disputatious to a tee.  If you watch the video on the Sixth floor of the museum, bit.ly/WfhG5M  a collage of alarming, charming and sometimes disarming contradictions, you will see how everything anyone says is cancelled out by another’s opinion, attitude or belief.

Sometimes I wonder if Scotland has worked out what it is yet.  I came to Scotland to pursue what I saw as my ‘heritage.’  I’ve been here nearly twelve years.  If I stay, according to a controversial essay by Alasdair Gray, I’ll be a ‘settler.’ But if I leave, I’ll have been a ‘temporary colonist’ – and that makes me quite uncomfortable. So I guess I’ll stick around then, Mr Gray, if that’s okay? 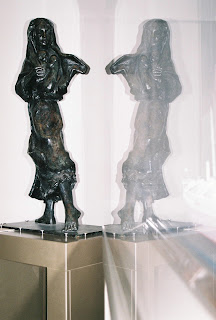 
She sent them out
Shifted or shipped
To the far-flung corners
They sent letters from
or
Africa, the
The
Opportunists found fortune
Prodigals their fate
All sought advancement
, Adventure
Diluting their accent
But not their nomenclature
Woven to a weave
They never wore
Sutherland no more
A land that once rejected them
Became again what fettered them
Posted by Tin Angel at 16:53 No comments:

Having spent many hours of the past year wandering around the , looking for objects to inspire me, it is often more than one piece that affects my choice of 62 words.  In this case, the influence goes back much further, to the introduction of Big Issue vendors.  At the time, I (perhaps unfairly) thought of them as the realization of the ‘Licensed Beggars’ that Ian McEwan depicted in his novel, The Child in Time. 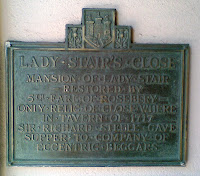 Of course, licensed begging goes back many years.  In the late 18th/early 19th Centuries, the Church was responsible for social provision, and could control who was permitted to beg in its parish.  It could also commend its citizens, who wished to move on to another parish, on their upstanding character and good behaviour.  While my starting-point for this sestude was a poor-badge from , I was also influenced by the sign in Lady Stairs Close, and a hand-written testimonial for one William Mathers. 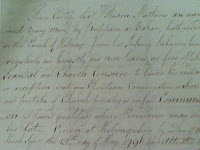 As we approach the season of good will, I thought I would turn this concept on its head.  In an ideal world, poverty and charity could be abolished or at least, reduced, if people lived according to their need instead of their greed.  On the top floor of the Museum, there is a short clip of Margaret Thatcher giving her diabolical ‘Sermon on the Mound’ Address to the General Assembly of the Church of Scotland.

According to Thatcher, ‘abundance rather than poverty has a legitimacy that derives from Creation.’

This is a shocking and heretical re-reading of Biblical truth: (in his letter to the Thessalonians) speaks of Adam being told to labour for sufficiency.  This is the Biblical alternative to poverty, not abundance. Thatcher was not only dabbling in theology well beyond her ken; she was also being highly offensive towards the marginalized, disenfranchised and under-privileged whose ‘poverty’ stems from inequality, not laziness.

I do not believe in God as such, but I certainly think that Christianity is based on unconditional love for all.  My ‘God’ is a God of equality.

This means that, while for some people, ‘living off the state’ becomes a way of life (and believe me, life on benefits is as insufficient as the minimum wage is as a ‘living wage’) we cannot allow the Government to realistically cut – and we’re talking, systematically abolish in the long run – the Welfare System on the basis of a small percentage of so-called ‘shirkers and scroungers.’  The real spongers are those for whom beggar-my-neighbour – profit-making at the expense of others – is a way of life.  The Tax-evading coffee-shops, the Corporate Businesses, the Private Landlords, the CEOs of profiteering retailers who pay their workers peanuts, and (at risk of offending some folk) the Royal Family.

How we can allow American Tycoons to run roughshod over our green and pleasant (Scot)land while the Government strips away the social-contract that Beverage provided us in 1942 is simply beyond me.  It beggars belief that the £26bn owed in unpaid corporate tax could pay for the Health Service outright.  Margaret Thatcher once, when asked (by John Simpson) to sum up Christianity in a word, said: “Choice.”  Well I’m sorry, Maggie (and her pathetic successors): beggars can’t be choosers.

And having got that off my chest, here is my 24th sestude. (a 62-word piece, based on a museum artefact) 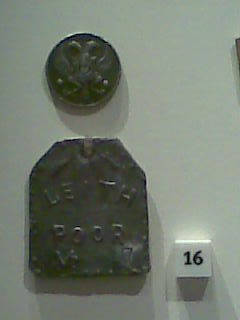