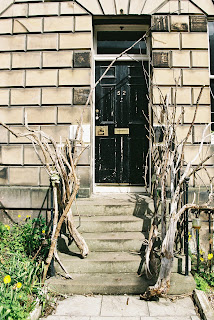 Fire Door, The Parliament Building
Here,
the impenetrability
of the Parliamentary
process is laid bare.
Behind a concrete façade
lies a complex charade:
more rooms than
a Father’s Mansion,
where debate, controversy,
conversation and bureaucracy
float about like hot air,
fanned by the fickle whim
of public opinion.
This building isn’t
about democracy
or political transparency.
It’s about how power
and fear can threaten
our National Security. 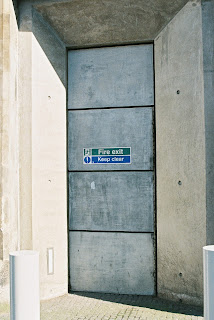 The World’s End Pub
It’s not the end of the world
as we know it. It’s an illusion;
a mural on the front of a pub
marking the position of the
Old Town Gate which barred
the exit to the Burghers too
poor to emigrate to James
Craig’s New Town Utopia.
At the real world’s end, all
imaginary doors, borders,
walls will open, lift, or fall. 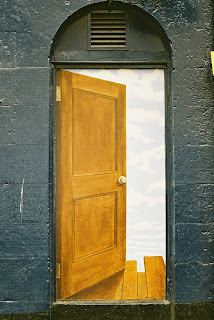 In life, the personal is always political. So I will end – if the reader of this page lives in a British country that wishes to impose barriers, borders, walls, and doors – with this plea: don’t vote TORY!
But to end on a happier note, to all those people named Елена: Happy name-day.

May your name be healthy.

Posted by Tin Angel at 04:49 No comments: Links to this post