I've often thought it unfair that, in the middle of the month of Festivity, those children (and teachers) who mostly go to what we might call 'normal' schools (a term I will explain in time) return to the classroom mid-august while the rest of Edinburgh continues to party.  At least most of these kids have Friday afternoons free to wander up to the Royal Mile, dodging the leafleters, to watch the street entertainers.

One year, I recall, a child got pulled out of the crowd to assist in some kind of fire-juggling or magic trick show, and was asked the usual questions: "What's your name?", and "Where have you come from?"  Instead of answering, Camberley, Cumbernauld or Canada, the wean - let's call him Robbie - said, 'School.'  Quick as a firework the Entertainer said, "Let's have a big cheer from Robbie who's with us today, all the way from... School!"
Here, then is the next School-days photo, for all those poor people (especially the teachers) who are back at school, unlike those in the posh schools whose cloakrooms will remain empty for a wee while yet.
Posted by Tin Angel at 08:05 No comments: Links to this post 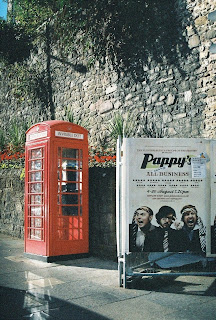 The Fringe has arrived in , over a week before the Festival which it first skirted, and with it, the pouring rain which fails to dampen the human spirit, but thankfully waters-down the crowds on the Royal Mile just a little.  As always, I will be partaking of the Free Fringe (and some not-free also), as well as the Book, International, and Politics Festivals, but I probably won’t be commenting much here on what I see since my theme for this year is phone-boxes and Glasgow School-Days.  In the spirit of History: here, from last year’s Festival Season, is a phone-box which came and went – much like the rain. (Having said that, the rain doesn’t seem to be going “any time soon.”) Here’s proof, then, that the sun does shine, even in August. Even in the rain...
Posted by Tin Angel at 16:08 No comments: Links to this post