If I were to answer the question, ‘Why haven’t I managed a monthly blog-post until the last day of January?’ the answer might be familiar to all self-employed freelancers. The dreaded Tax Return. However, after the usual procrastination, I logged into my account only to find I didn’t need to.

It seems that, after years of existing below the threshold, the Tax Office has finally got bored with my paltry finances. While this is a relief in many ways, since trawling through a thousand unanswerable questions was pretty tiresome, it is strange to admit that I’m officially an impoverished artist.
It’s also rather liberating. I live within my means, with few frivolous expenses, and I do enough ‘extra’ work to allow the odd luxury while keeping those extra hours for my creativity. Sure, it would be good to be able to earn more from my creative endeavours, but that’s not the reason that I do what I do.
Creativity is a compulsion. I can't imagine how I would be able to make sense of this complicated world if I wasn’t an artist. Creativity is good for one’s health, for society’s health, and for the planet. Why do we have artwork along hospital corridors?

Because art makes people better. Yet it does cost money. As Joni Mitchel says, ‘Artists in noble poverty go like virgins to the grave.’ (Meanwhile, on the same album, she was ‘stoking up the star-maker machinery behind the popular song!’)
For all my ‘noble poverty’ I appreciate that art is not separate from the systems that, sadly, make the world go round. When creative projects are stripped of funds – as has happened to many organisations in Scotland recently – people have to be doubly creative in order simply to finance their practice.

My good friends at the Edinburgh City of Literature Trust are in this position.

A Unique City
To have the unique status of being the first ever UNESCO-designated City of Literature is something Edinburgh should be proud of. Our main train station is named after a novel, and throughout the station there are quotes of Sir Walter Scott (thanks to the City of Lit.) At the top of The Mound is a quaint little close where Scott, along with our National Bard, Robert Burns, and Robert Louis Stevenson are celebrated in a turreted museum dedicated to them.

On the pavement there are quotes from Scottish poets ranging over hundreds of years, and signs advertising Literary Walking Tours. But you don’t even need a tour-guide.

Amble down the Royal Mile to the Canongate and there are light-boxes installed in the windows of pubs and shops and cafés, each with a quote from a writer connected in some way to Edinburgh’s rich publishing history; an illuminated trail to inspire and light up the night during the long winter months. 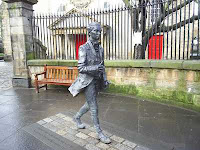 These are dark days indeed, even if January has basked in two full moons, as the City of Literature Trust’s effort to light up our city’s life with a bright ring of words has been snubbed by a major funder. Outside the Canongate Kirk, a statue of Robert Fergusson attempts to stride down to the Parliament building at the bottom of the hill. His words, incised in concrete around his feet, declare:

Auld reekie wale o ilka toun
that scotland kens beneath the moon
And on the Parliament too, carved into a slab of Argyle marble, we read the words of Mary Brooksbank:
Oh, dear me, the warld’s ill-divided,
Them that work the hardest are aye wi’ least provided.
...which calls to mind the truth that, during the Festival Fringe, the folk who make the most money are the big businesses who benefit from the boost of creativity and culture. The artists who provide it do so at a huge personal cost.
Art is important, and literature tells far more than just the story of a city: it is the city. But it costs money, and the funding cuts people have suffered will leave Edinburgh impoverished in more ways than one.

Generating money for the already-wealthy is a poor show, and I can only hope that someday, somehow, someone will re-elevate the turret-dwellers to their rightful, illuminated place.

Follow the Stars and Stories here – or come to visit Edinburgh and soak up the literature that makes our city so special.


Posted by Tin Angel at 15:59 No comments: Links to this post