Last week, I was in a short documentary about sperm donation. Regular readers of this blog, and those who know me well, will be aware of the irony behind this. A few years ago I found myself to have been an unwitting, involuntary donor of sorts. Whether anything ‘came’ of this, I’ll never know.
Some time ago I was engaging in pub-chat when someone asked the question, apropos of nothing in particular: “What do you regret most about your life?” A carefully-worded question that somehow avoided the obvious reaction, to say what you regret having done, one friend answered with something he hadn’t done.


“What do I most regret?” He answered: “Easy. Not having children.”


As the conversation continued, we discovered that he and his wife had not been able to have children; adoption wasn’t an option for them, and sperm donation was inconceivable. Now in his fifties, it remains, and always will remain, an aching lacuna. Nothing we could do would placate him over this regret of absence.


I heard a similar tale on the radio recently when jazz pianist, Bill Evans, was the featured composer of the week. We heard the story that he and his partner, Elaine, were unable to have children. It seems that the problem lay with Elaine, so Evans left her for another, apparently fertile woman. His desire to procreate seemed more important than his commitment to love.


In fact, it overruled life itself: Elaine was so devastated by the situation that she threw herself under a train. When Evans’ new partner gave birth to a son, they named him after his father’s surname: Evan. He may have been the ‘Chopin of Jazz’ and a ‘Poet of the Piano.’ But he was also a selfish git.


On the flip-side, there are people who actively decide not to have children. I spoke to a couple of friends earlier this year who had sealed their commitment to one another with marriage, and their agreement not to procreate with an operation. Tying one knot, while snipping another cord!


It is easy enough to reverse a vasectomy, of course, but that’s a bold decision to make at the start of a life-partnership. For the record, I’m pretty sure that very few men, outwith a life-long relationship, would voluntarily vasectomise. This is why I greeted the question (following ‘that’ sexual encounter) if I had had ‘the operation’ with suspicion and surprise.


There is yet another side of this coin (since humans do not fit into a simple head-or-tails binary) for same-sex partners. Two men have no choice than to have children through a surrogate route, but for women in this situation, at least one of them may bear a child, having procured the means. 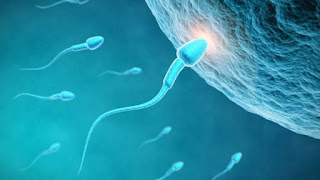 This documentary was a good-humoured look at the search for a suitable sperm-donor, which was not without difficulties. The film-maker and her partner who wanted to have a child described sperm-donors as being like flats: if you don’t snap them up, someone else will get there first. The voice-over was addressed to the unborn child, or perhaps, unfertilised seed, with some amusing lines... “Soon you will splash into our world.”

The key part of the film was to do with choosing the ‘right’ donor. The two women looked through hundreds of profiles, with only pictures of the donors as babies or infants to go on. In the hope of finding the perfect match they read details on personality, DNA profiles, and testimonies about the donors’ reasons for donating. It was not unlike certain dating websites.


My part in the film, with other random men, was to provide an infant picture, do a bit of voice-over, and have a bunch of close-up shots that formed a montage of possible donors. Seeing my ears far larger than they are in real life on the big screen of my favourite cinema was a scary thing! But it was, I suspect coincidentally, a defining factor.


How did the women choose? They agreed that you’d want the baby to look like you. They arbitrarily rejected an infant with a squint, and at one point – much to my amusement – cried out: “Check out those ears!” Another salient point was, “God forbid it has asthma.” My mother and I both suffered horrific asthma as children. It is not something I’d wish on any infant.


When I spoke to the film-maker after the screening, I told her that although it is focused on the LGBTQ+ community, the film had broader, universal themes. It raised questions about our desire to widen the gene-pool, the reasons to donate sperm, and a woman’s urge to create a life. Above all, it was a touching, personal journey about two women, living and loving.


In October this year, the NHS sperm bank in Birmingham closed due to lack of donors – only eight men came forward in the two years since being set up – and even one of those pulled out. Perhaps a Roman Catholic. I suspect his excuse was a limp one, yet a more serious issue lurks.


Since 2005, a change in law means that, on turning 18, people have the right to discover their natural father, which may explain the lack of donors. It is no longer anonymous, unless you donate to an unregistered service overseas, which is not without ethical issues.


Even a single woman can request IVF, although it seems a pretty bloody selfish thing, to bring a child into the world without any wish to give it two parents, no matter their gender. Children of single parents start asking questions as early as three years old, but I doubt the single mother’s answer will be, “Daddy was a convenient £950 transaction from a ‘bank’ in London.” The duplicitous person with whom I was in a fraudulent relationship told me that she had wanted to purchase sperm and bring up a child alone. I should have heard a warning bell, but – hey – ‘love’ is blind. Not that it was love. It was lust, and greed; theft and deception. She was callous and unhinged.


On our final tryst, days before I discovered the truth about her, we met (ominously) in a graveyard. She pressed her body into mine, saying, “I’m so sexually attracted to you,” then added, casually laughing, “We even look like each other!” She had clearly chosen me. Should I feel flattered?


Or should I feel used – and abused – for saving her the trouble of searching for a donor using the honest, difficult method told in the documentary. I suspect she and her fiancé – about whom I knew nothing – were exploring those very options; clearly, the problem wasn’t with her fertility.


As I’ve said many times, short of reverting to the Courts or Jeremy Kyle I’m unlikely to find out the truth. Without DNA proof, how would I know? One friend said to me, “Just by looking at the thing!” I suspect he was referring to my ears (scroll down for the ear-story...) but of course, I’m hardly likely ever to see this child.


Perhaps I should name-and-shame the parents? That would be retaliation; a petty reaction, stooping to their level. Their subsequent behaviour towards me has proven their complicity. The real victim in this is the child, for whom out of pity I ought to show compassion.

Whether or not I’ve been denied the right to be childless by choice, I still have integrity and dignity.

Posted by Tin Angel at 15:15 No comments: Links to this post