Back in the days of vinyl (where this year’s discussion of all things blue began) and of recording your favourite records onto cassette tape, wondering why you could never quite fit an LP onto one side of a C60, and a C90 left an annoying gap at the end, many years ago I recorded my Dad’s much-played copy of Miles Davis’ Kind of Blue. I didn’t realise that a piece of fluff had got trapped under the needle. Playing it back, the final track (Flamenco Sketches) became more distorted as the stylus gradually gathered the detritus of the record deck. By the end, Miles’ plaintive trumpet could barely be heard beneath the crackle and fuzz. 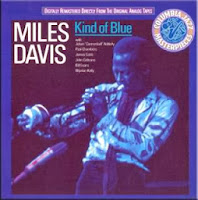 I played it in that state again and again, wallowing in a sort of protracted misery. If you’re going to be blue, why not drown in the depths of it. Similarly, I liked the way my sister’s old, second-hand record player (we were a family of hand-me-downs) played Joni Mitchell (and, perversely, AC/DC et al) slightly slower than 33 1/3rpm. Whenever I play Hejira it feel as if the tempo is just a bit too fast, and I’m always waiting for the blip in ‘Refuge of the Roads,’ where someone jogged the needle during recording. Somewhere, I still have that tape.

It’s very easy to let music drag you into depression, or to exacerbate or validate your mental state. I used allow myself to fall into the trap of musical maudlinism, thinking my emotions were best played out in minor keys. It took a long time to make the cognitive shift that convinced me that being in pain wasn’t the only way of feeling truly alive. For me, depression wasn’t an acknowledged, diagnosable or recognisable illness. It was a way of life, a raison d’etre. And if miserable music provided a vicarious overture to my misery, all well and good. Or, as it turned out: bad.

For years I suffered from low-level, chronic depression which resulted in episodes, attitudes, and behaviours that I can now describe as black, not blue.  Although I was able to live and work a seemingly normal life, my sense of self-loathing, anger at living, and general hatred of the world and its inherent shittiness was debilitating. I saw it as part of the natural order: this is what it means to be an ‘artist.’ I suffer, therefore I am. It took a cataclysmic event to shake off that attitude, and the shock-waves reverberate to this day.

Tonight the shadows had their say
Their sad notions of the way
Things really are
Damn these blues!

This year’s sequence, twelve poems about the colour blue and its various connotations, was written at a time when I was trying to unravel the cognitive dissonance of my condition, and although I’m not sure it achieves this, I’m not unhappy with the poems. 2013 has been a mixed year for me as a writer, with some notable successes, but also with heavy disappointments and rejections. The books, websites, and tutors of creative writing encourage us to embrace those rejections, to see them as opportunities, not threats. Easier said than done, in more ways than one.

Often I think of my relationship with writing as a difficult marriage. (I feel a similar way about my adopted home, Edinburgh.) Sometimes love just isn’t enough: if the relationship has, through no fault of love, been undermined, eroded, or unpicked by the perils of the human condition, there is little can save it. Among the writers with whom I associate, even those who are way further up the ladder than me are plagued by self-doubt and blockage. But all writers have something to say; a story to tell, a song to sing.

The human condition amounts to nothing more than a song.

These days, I try not to listen to sad music for pure effect but rather, within a context; preferring to be uplifted or stimulated by what music means, rather than what it does. If that sounds a bit dry and academic, so be it. The 2nd Viennese School of composers in the 20th Century reduced music to the basic component of the twelve tones of the scale; called it dodecaphonic. J.S. Bach – arguably the greatest composer – was a mathematical genius whose music stimulated intellect, emotion, and gut in equal measure.

I cannot think of a better way of tackling life than balancing those three centres of being: head, heart and body. I’m not claiming to be completely on top of things mentally. If my assessment here sounds trite or simplistic, that is because mental health (I say health, not illness, on purpose) is a hugely complex subject, and the relationship with music is a minefield. I’ve never taken medication, and hope I’ll never have to. Sometimes, it is enough to clear ones head by going out for a brisk walk. Or failing that (possibly avoiding the Passions) just put on some Bach. And sing, of course.


All the factors of the poem-cycle, taken through a ramble of lines (the same shape as Cantos III, VI and IX) contrive to end where the cycle began, with the ink on a pin turning into a song: an act upon which our existence relies; the creative process and the reproduction in performance are only the beginning.


The winds twelve quarters, the apostolic hardships, the Trinity.


4 by 3 the math; the psychopath, the dodecahedral polymath.

The minor interval, the chordal progression, the scale.


Fish to flesh, feather to bone, clay to clod to dust.

Enamel slip, animal slype, a plant, a dye, a daub.


sanskrit mandala, burden or mantra; ink on a pin. A song.