Sometimes I wonder how many writers stay in on a Friday night to listen to BBC Radio 3’s programme, The Verb? In the case of performance poets, probably as few as the singers who listen to Sunday afternoon programmes of Choral music! I’m not going to start questioning Radio 3 schedules, and as for presenters – ach! At least Aled Jones no longer presents The Choir (now sensibly re-named, Choir & Organ.)
But The Verb has always been high quality, and now that the host, Ian McMillan, features a focus on Spoken Word he has a regular guest: the wonderful Hollie McNish. Some years back I took part in a poetry slam – a rare thing for me. I performed my ‘Anti-Slam’ poem, in which I ‘slam’ – or, I would prefer to say, satirise – the poetry scene; in particular, the student slam-scene and the ‘slam voice’. I won’t print it here, for obvious reasons, except this bit:
The poetry slam, the poetry slam –
for the feisty young woman,
and the angry young man.
The feature poet on this occasion was the afore-mentioned Hollie McNish who, after hearing my poem, changed her set in case she came across as a feisty young woman. Horrified at the thought of criticising someone I admired, I was also, secretly pleased that she’d taken in my words – if a little too to heart. I apologised after, and found her to be a warm-hearted and lovely person.

I was delighted to learn that she was now on my favourite wordy programme.
Friday nights are a funny time for Spoken Word events. I often used to find myself thinking, ‘why am I listening to The Verb on the radio when I could be hearing words performed live?’ The fact is, there aren’t so many of these gigs on Fridays in Edinburgh, especially now Rally & Broad are no more. And on Saturdays, fewer still (unless I’m missing a bunch of stuff?)
Keeping myself off the beaten track, and trying to squeeze poetry into unusual places, this year found me doing a regular slot at a certain Edinburgh Jazz Bar. Three singer/songwriter friends once had a Saturday tea-time acoustic slot, and I was invited to do some pop-up poetry between sets. It was a tricky gig, since the audience was never the same, and I could never be sure how well my poetry would go down. On the whole, the reception was good.
Sadly, that tea-time acoustic slot has been moved to Friday where the post-office crowd are less responsive. Which is ironic since Friday, for office-workers, is POETS-day:
Piss
Off
Early
Tomorrow’s
Saturday
So instead, I stay in and listen to The Verb which, in November, celebrated 35 years of Spoken Word. It seems that this novel phenomenon isn’t that new! As someone said, either on The Verb or The Essay, on Radio 3: “It’s been the same old shit since Shakespeare!”
I get irritated when some younger performers claim that they’ve rejuvenated poetry. If they ask a classroom of kids, “Who thinks poetry’s boring?” they’ll get a cheerful ‘Yeah!’ since it is a leading question anyway. But to perform what they think is ‘better’ poetry is arrogant... especially if it is their own.

Offer school students Chaucer, Catullus, Shakespeare, Byron, or Larkin at their sauciest and these young people will never say poetry’s boring again.
What’s important here is, whether you write on the page or for the stage (and this heated debate will rage ’til old age) what cannot be compromised is craft. As John Agard – a doyen of the early Spoken Word scene – said on that episode of The Verb in November, when talking about the early days of the scene:
Something interesting was happening. It wasn’t a ‘dismissing’ of literary poetry, because I’m a firm believer – no matter how stylish you are on stage; no matter how much charisma you have physically – if you don’t apply craftsmanship and let your words resonate, it will be a fleeting, momentary experience.
Every so often in the spoken word community in Scotland, a discussion occurs debating the various habits and traits among performers. The one that most riles me is when a poet steps up on stage announcing, “Here’s one I wrote on the bus this afternoon,” or something similar. Every performance – whether of a single poem, a five-minute open-mic slot, a full feature-set or a seemingly impromptu recital – should be crafted as carefully as possible.
Perhaps that’s just me and my classical background. You wouldn’t see a singer or actor stand on stage and say, “Oh: what shall I do now. Oh yes, that one about the...” and then trot out a performance that they cobbled together earlier in the afternoon.
On that same programme, John Agard said, “It’s very crucial – in this celebration of ‘the word’ as utterance, and as spoken, and performed: we don’t forget that Shakespeare is a performance poet.”  Not the ‘same old shit’ then. To perform poetry that aspires to Shakespeare, just as all art should aspire to the condition of music, is no bad thing to aim for.
I’m not saying I’m immune to the foibles and failures of poetry performance. Besides my penchant for props, pictures, playing a recorder and occasionally bursting into song, I am also prone (apparently) to over-long introductions. From time to time I turn this into a feature; other times, I just launch in. But the important thing in this is learning to read the room.
That said, a poem should be able to speak for itself, so my long introduction to the poems in this post has already shot itself in the foot. Yet sometimes it’s good to have a bit of background. There may be references to learn, unusual words to gloss, or an amusing back-story to bring to the fore – these may illuminate the poem if performed live, off-page.
Here, then, are some more of my poems from the sequence written for my good friend and muse; 26 sestudes on doors, friendship, and journeys between the two.
26 Doors Between My House and Yours...
The first requires more than a few musical references, so I will post the poem first and then, in a retro-introduction, gloss all the pieces of music with the help of Youtube!
Gymnasium, Pleasance Courtyard 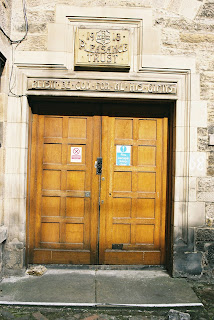 Kate Bush had doors opened that
she thought were shut for good…
Peter Gabriel walked through the
FRONT DOOR of his Big Heaven…
Bob Dylan kept knock-knocking.
Schubert shut the door and, like
Vaughan Williams’ vagabond, he
wrote ‘gute nacht’ upon the gate.
While Howell’s Little Door beheld
the gift of Life and Death: eternity.
Lift up the latch to this epiphany.

Kate Bush had doors opened that
she thought were shut for good…
Peter Gabriel walked through the
FRONT DOOR of his Big Heaven…
Bob Dylan kept knock-knocking.
Schubert shut the door and, like
Vaughan Williams’ vagabond,

he wrote ‘gute nacht’ upon the gate.
While Howell’s Little Door beheld
the gift of Life and Death: eternity.
Lift up the latch to this epiphany.
The second poem needs less introduction or explanation: it’s all in the poem. My only addition is to mention that, not only was my father born 81 years ago, on December 24th he entered his eighty-second year – and is still going strong!
Substation, Carnegie Street 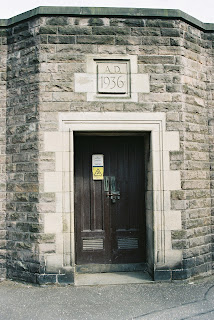 You have to love this city!
It’s crammed with hyperbole;
much of it a front, or folly.
Take this substation for example:
a grand façade for something
so perfunctory, to gauge electricity.
Even the warning, ‘Danger of Death,’
seems to over-state it’s claim.
Only the date above the door
says something more – to me.
It is the year my father was born.
And the last of my doors for this year has a valedictory tone. While these poems (and photos) celebrate a particular friendship as well as the symbolism of doors, this poem – I feel – has a universality about it which – hopefully – speaks to anyone who reads this ranty, grumpy blog. The sign above this door, translated from the Latin, reads ‘May you enter in peace, and exit in Health.’
84, Canongate 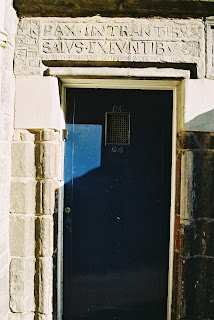 PAX INTRANTIBUS
SALUS EXEUNTIBUS
We enter and we exit.
Sometimes we hide
behind closed doors
for fear of what’s outside;
othertimes, for reasons
much the same,
we venture far too far
beyond the frame,
eager to learn more.
Sometimes the door
is locked within;
othertimes, outwith.
So be it. Amen, I say.
I wish you peace, health,
but above, far, far above,
I wish you love.
Whoever you are, wherever you are, I wish you a peaceful and healthy New Year.

Posted by Tin Angel at 16:17 No comments: Links to this post