Back in August, I was wandering along the path in London Road Gardens, running through one of the stories I’d memorised for the various Fringe performances I was giving. In my own (or characters’) little world, I passed by a bench where a bunch of lads were sitting. One of them called out, ‘Like your ears, pal.’ Knowing that my slightly protuberant ears can be a source of mirth to some, I thanked him and continued on my way.


Then I thought, no: sod it. I turned back and said, ‘Thanks for the “compliment.” I’ve been a musician for 25 years, so my ears have served me well, and in this way given pleasure to a great many people.’ He looked non-plussed. ‘Tell me,’ I asked him: ‘What part of your anatomy has given pleasure to many people; what bit of your body defines who and what you are?’


I think he got the joke, as he grinned. But before he was able to answer, I pointed at his crotch and cut him off. ‘I expect you’ll say, “my cock.” Which would be right, because that is exactly what you are.’  I walked off and, unlike Orpheus, knew not to look back as I resumed my inner monologue of imaginary people.


For years I eschewed the Welsh bit that makes up my DNA, but last year I wrote a poem for my mum (who perhaps feels her heritage is side-lined by the stronger pull towards the Scots that I have followed physically, or better put, geographically since I came to live in the land of my father.) Here then is the poem, dedicated to my mum on her birthday, which fell yesterday.

Welsh Ears
You get yours from the Welsh, my mother said.
It was a meagre consolation to
a boy, self-conscious and embarrassed, who
attempted to disguise protruding ears
behind a mop of fine white silky hair.
They stuck out as an easy target for
the other kids to flick or tease. For years
I blamed the Welsh for my deformity.
In time, I learned my other Celtic trait
was based on my ability to talk.
My god, those cousins, uncles, aunts knew how
to hold a conversation lasting hours!
My uncle, Howard, loved a good debate,
and Grandma prattled on about her state
of health, while cousin Bill would reminisce
about the good old days of male voice choirs.
And then l found I had another link to this
strange land of valleys, music, mines and sheep:
I could sing. Except, my voice was deep.
At least my musicality allowed
me to acknowledge that I could achieve
a skill to make my ears feel justly proud.
So with my new-found vocal aptitude,
attending a family funeral of some
relation (was it dear old Uncle Tom?)
for the singing of the final hymn
(Cwm Rhonda, I imagine) I joined in
with my young baritone, stentorian.
And as we left the crematorium
my ears, so sensitive, pricked up to hear
a lilting accent marvel at ‘that voice.’
I waited for the compliment to come,
but no: I was denied of such a thrill.
The voice they meant was my old cousin, Bill.
He was a tenor: naturally his tone
would overpower my adolescent baritone.
For once, I held my tongue. And being young
I hoped that age, experience, and time
would give me opportunity to hone
my hearing and my voice as only mine
and not a garrulous extension of
a heritage I never knew as home.
And now my brother’s daughter is in Wales,
learning music like a mother tongue,
but not because it comes from national pride,
genetics, education, or the blood
of those who came before. If this were true,
our progeny would be assured.  It hails
from something deep inside our heart or head
or gut – it makes no difference if our blood’s
from England, Scotland, Ireland or from Wales.
It isn’t what, it’s who we are. Yet so,
I wonder if my child would have Welsh ears.
I guess I’ll never know – or never hear.
Here's another poem, which is sort-of related... at least, it might be. When it comes to poetry, you’re allowed to question its pedigree. But when it comes to parents, it’s good to know who you’re related to.
In Years to Come
You kept it hidden from me; even so
I sensed it long before you knew.
My chief regret: I never saw you grow,
I never saw when you started to show;
never got to paint the nursery blue.
You kept it hidden from me; even so
you told me. Exactly why, I’ll never know.
Left to my imagination, naturally I grew
my chief regret: I never saw you grow.
My banishment from you, a heavy blow,
yet separated, still I felt a part of you:
you kept it hidden from me; even so
I suspected you would bloom and glow
and so as time ticked on, each day renewed
my chief regret: I never saw you grow
or got to choose a name but, even though
I had no choice, I saw it as a gift to you;
you kept it hidden from me, even so.
My chief regret: I never saw him grow.

Finally, a poem about death, or the legacy that we leave. Sometimes poems go on a journey, and this one - although written some years ago - seems to get dug out for perusal more often than most. In its published form, it is as it was written. But when I perform the poem live, I am at liberty to change the odd word. I'll take that liberty now. Answers on a postcard if you know which word has been altered.
(But first, a picture of a Welsh poet whose lines I steal from time to time, along with Joni Mitchell's!) 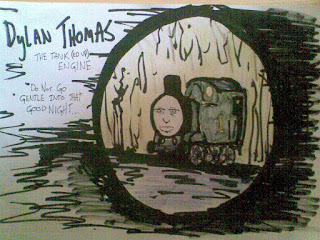 Un-titled
It’s not the dying that bothers me
but the death I want to get right.
I don’t want to be hit by a bullet or bus,
or slip peacefully away in the night.
I’d rather be surrounded by friends
and loved ones when it happens,
to cheer my achievements, clap
or commiserate, curse or bless,
forgive, or perhaps make amends.
To go gentle into that good night,
not greeted by the kiss of death
but the releasing caress of life laid on mine:
the inquisitive lips of the child I never knew;
intoxicating tongue of an un-savoured wine;
the familiar touch of a lover;
palliative hands of a nurse.
I don’t want a frog to wake me, or God,
a pope or a judge, a prince, a priest or worse –
I’ll leave all that shit to the living
to haply remember or haply forget.
When it comes I want to embrace death,
as the cherishing earth takes me, since that –
and these lines from time to time –
is all that I have, all that I leave
and, in dying, all that I’m giving.