Sometime last summer I posted on my Facebook page a cryptic message. It read: “When someone who caused immense emotional turbulence over 20 years ago finds your (locked) twitter account and, out of the blue, requests to follow you... Accept or Decline? Or stay awake wondering, Why?” It was interesting to see how people interpreted what amounted to a tabloid-style headline of scant information with enough sensational content to create a reaction.
Only one of my 300+ Facebook contacts – my lifelong friend Sarah – had any true idea of what I was talking about. I received a number of responses, mostly of the ‘don’t go there’ variety, or ‘decline – sleep well’ kind of thing. Others were less aghast. My good friend and collaborator, Paul, said “Do it!!” suggesting this would lead to more material for my miserable stories! Another friend, who is a writer, said that curiosity would get the better of her.
This writer was working on a memoir at the time, so I asked her how far should you go; how deep should you delve into the rabbit-hole of the past? “As deep as you can go,” she replied, suggesting that I shouldn’t leave any stone unturned. “You might not be able to use all of it, but – yeah – dig away.” I can’t wait to read her book when it comes out next year! We also agreed that it seemed people reacted adversely without knowing the context. This sums up the way most journalism works.
Allowing this person to follow me on twitter wouldn’t change much. These days I rarely tweet, and my account is locked to prevent specific people from abusing me and my friends. Furthermore, the question I posed didn’t talk of following her back: that would open a different can of worms... perhaps. So before I say what happened next, I should give a bit of context.
Exactly when this person requested to follow me is hard to say. I’d not been using twitter much, and wasn’t in the habit of checking my follower requests. She now had a different surname (she got married many years ago) so I didn’t spot her at first. However, I’d been looking up old friends on Facebook and saw her profile picture among the friends of an organist I once knew. This was her twitter avatar also. When, by chance, I looked through my follower-requests, the penny dropped.
Accept, or Decline?
There were too many other questions before I made a rash decision either way. Most pressing to me was: how the hell did she find me? She wouldn’t have known the ‘nom-de-plume’ I have taken on since changing my direction from music to writing ten years ago (although she would have known about my writing aspirations.) Also: why did she find me? We haven’t had any contact for, possibly, twenty-five years. As far as I’m aware she is happily married with two teenage girls and is getting on with her life. Why would she want to know anything of my soap-opera life now?
Perhaps I should give some back-story before I try to answer these questions. When I graduated from Music College, I went to live in a small provincial city west of the Midlands to start my life as a singer (and also, I hoped, as a writer) but found this change a massive jolt after London. I was far from happy, but someone whose unhappiness far out-stripped mine became a frequent visitor to my flat. A young woman who was deeply troubled by something that she was utterly incapable of putting into voice would come and sit with me for an hour, and then leave with barely a word. 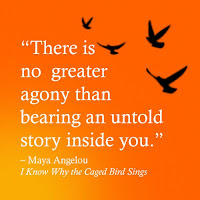 It would be several years before I got to understand something of what had silenced her. When she left for university, I sent her a copy of Maya Angelou’s first autobiography, I Know Why the Caged Bird Sings. This at least opened up a conversation through letter-writing (this was before email existed) but, in the end, it seems she was forced into silence again. We fell out of touch, and I was left wondering: what was the truth of her story.
This not-knowing and yet-knowing-something has had a profound effect on my life. It has informed and influenced almost everything I have written, and caused colossal turbulence in ways I cannot bring myself to talk about. Now I am the silent one. Something I must be absolutely clear about is that I do not bear a grudge, or blame this person for any of this. I have never stopped wondering how things worked out for her, nor ever ceased to hope that she has ‘survived.’
Does this answer any of my questions? I doubt it. Her twitter account is also locked, and Facebook gives no clues. What plagues me most is that my part in her life, over twenty-five years ago, created more disturbance than I had the right to cause. What if this twitter-request was an olive-branch? Surely I’d be a fool to ignore it. Or was it some kind of threat? A sword of Damocles, hanging over me? It seemed unlikely.
So I clicked ACCEPT. And – guess what – nothing happened.
Summoning the ghosts of the past is one thing, but when they come knocking at your virtual door, you have a choice to ignore them and hope they go away. Or, better still, to let them in so they might never haunt you again. There was, however, one more thing I could do having opened this one-way portal to my past. Request to follow her back. I waited until January this year before I did so.
Within days it was accepted.
Curiosity couldn’t prevent me from having a look. There is little action on her twitter-feed, and only a long list of followees mainly relating to her daughters’ activities. One thing I noticed as I scrolled through was that, despite showing little interest in literary feeds, there was one author (sadly, who died four years ago) who this person follows.     Maya Angelou.
The caged bird sings
with a fearful trill
of things unknown
but longed for still
and his tune is heard
on the distant hill
for the caged bird
sings of freedom.


What happens now I cannot say; I simply don’t know. I can’t resist, although it does not match our situation, ending this post with a poem by Elaine Feinstein.  My former friend may understand why.
A Letter from La Jolla
On a balcony in California
being surprised by February
which is the sweet season here, when
blue-scaled grunion dance
on their tails, at high tide
on La Jolla sands, to mate there
and are caught in pails and eaten,
I write across distance and so much time
to ask, my one-time love, what happened to you?
Since my last letter which I meant to be
as cruel as my own hurt could barb it, now
under yellow skies, pale sun, I sit
sucking fresh limes and thinking over
my childish spite, and how much life I’ve wasted.
I’m jealous of the sensible girl
you must have married long since.
Well, I’ve been happy, too.
Sometimes. You always knew
the shape I’d choose would never
be single or sober, and you did not need
what you once most admired.
Unswerving as you were, I guess
you must be prosperous, your children neat,
less beautifully unruly than my own
perhaps less talented, less generous;
and you won’t know my work or my new name,
nor ever read my books.
Our worlds don’t meet.
And yet I doubt if you have altogether
forgotten the unsuitable dark girl
you held all weekend in your parents’ flat,
talking and talking, so this letter
comes to you this morning almost in play:
our thoughts once moved so easily together
like dolphins offshore to the land mass of the day.
ELAINE FEINSTEIN
(from Badlands)


Posted by Tin Angel at 12:38 No comments: Links to this post