And the Winner is...

Well me, of course. When I offered a prize back in April to whoever could name the location of the phone box pictured in that month’s entry, it was a hollow offer. Being an anonymous blog, I can hardly identify the person who left a comment with the correct answer. But having ‘moderated’ it, you will find it by clicking 'April' (right.) And if you are reading this for the first time and want to know what this waffle is about, you might like to start in January (click 2011 and Ctrl+Pg down), and follow the phone-box trail, while I tuck into my crème egg, twisted.

The real winner, however, has to be my Dad, who (for those who follow this waffle top-first) is thankfully on the mend, and managed to escape hospital in time for Hogmanay. Having posted on here some of the black-and-white snapshots that make up childhood memories, it seems that certain elements of his formative years have caught up with him in old age. Or is it too easy to say that a childhood in a deprived area of a large city, with malnutrition, economic depression and impending war should result in osteoporosis some seventy-five years later? Probably – but who knows?

As children, we like to blame our parents for the way we turn out; conversely (or do I mean; likewise) our parents shoulder a disproportionate responsibility for the things we do, be they right or wrong: parental pride and shame go hand in hand it seems. Maybe it was my ancestors who were responsible for clearing their own people off the land that was theirs; an act for which all Scots ought to be ashamed. This is the ever-deepening coastal shelf that Larkin speaks about (I took his advice and never had kids myself), or the crumbling spine that links my father to his apparently ‘deprived’ childhood. I’ve never, in stories of his youth, heard him describe it as such.

Everything changes, as the poets and pop-song lyricists say. Some put it this way: we plant trees for those born later. Others say, they took all the trees and put them in a tree museum. But a third, on the subject of growing older, said ‘Every day won from such darkness is a celebration.’ The same poet (points if you know who) said ‘God punishes regret.’ I took these lines to my heart from the second I read them, and they have been a mantra every bit as meaningful as the prayer for serenity attributed to Thomas Aquinas (the only ‘prayer’ I have ever heard my father attempt to quote)

My dad’s old secondary school is now a pub, something of a museum itself, with memorabilia, old photos, and a host of accoutrements that reflect the past, just as the mirrors behind the bar show us just a little bit of who we are as we order our beer, before our eyes get too misty or maudlin with nostalgia or alcohol – or a heady mixture of all four. This is the trouble with the past. Some dismiss it as irrelevant; others resign it to history; but there are those who spend each day regretting it, trying to re-write it, wishing they could scrape the slate and start again.

So I end this year’s bloggage with the final photo from my dad’s Glasgow Schooldays Calendar, ‘The Old Schoolhouse Pub,’ with a tinge of sadness that, although I chose this picture for the month of his birthday, he hasn’t seen much of it from his hospital bed. Furthermore, I can’t help but regret that the phone box in front of the building is not the one that may or may not have stood there when he sneaked in through the side gate (to avoid the prefects reporting him ‘late’) but one of those I most despise (or dislike). 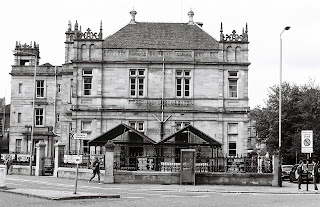 If I could be bothered, I could do a wordpaint-job and turn it into a tacky picture like they sell in TK-Maxx, with red phone-boxes, routemaster buses, or pillar-boxes super-imposed on black-and-white pictures. Sometimes, you just have to accept things as they are. My dad has never needed God to give him that serenity. I don’t know where he gets it from; it would be like asking someone ‘what is jazz?’ As the great Satchmo said: if you have to ask, you’ll never know. Of the many things my dad has taught me over the years, it is for the most inexplicable that I remain eternally grateful. Here then, as this year turns into the artificial past, is a ‘prayer.’

Teach me, Dad, serenity…
to accept the things I cannot change,
courage to change the things I can,
and wisdom to know the difference.
Posted by Tin Angel at 09:28 No comments:

This year I’ve made a distinction between ‘normal’ and what I call ‘posh’ schools.  I don’t wish to qualify this, except to say that neither ‘public’ nor ‘private’ schools can be described as ‘posh’ any more.  Both are exclusive, in that they exclude those who do not (or cannot) choose to use their money to improve the education of their offspring.
I think my views on how tax is spent on warfare, to the detriment of decent education, public services and healthcare for all make my position clear when it comes to what I see as ‘normal’ schooling.  But this, like the nomenclature of privilege, is just a name.
What’s in a name?
My dad’s old school was indeed called The Normal School (it was thus, on the front of the tram whose route the Normal School was on.)  It is now a business centre.  And my alma mater, which moved several years ago (to a former Naval College – a fine location despite all that); the old building where I studied is now a School of Economics – surely the antithesis of an Arts Conservatoire? 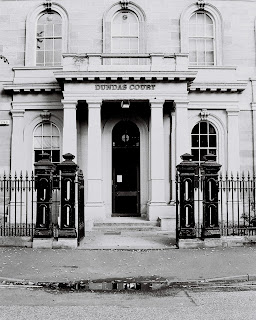 I am of the type of personality for whom ‘normality’ is strange, and ‘ordinariness’ is at best a watchword; at worst, an area of utmost avoidance.  Yet I’m glad my dad went to a ‘normal’ school.  Being ‘ordinary’ doesn’t mean, lacking unintelligence, or talent, or ability.  My dad has this and more.  I just wish he didn’t have to spend the end of this anniversary year in hospital, at the mercy of an under-privileged National Health Service.
Posted by Tin Angel at 13:41 No comments: