Unless I’m very much mistaken, the road-sign alerting drivers to the possibility of on-coming cattle is usually depicted by a cow. But there’s one nearby a certain scientific institute on the outskirts of Edinburgh with a picture of a sheep. One might assume its name is Dolly – or Polly or Tracey or any other of her scientifically-constructed sisters.

You won’t see Dolly grazing by the roadside next time you visit Roslin: she died in 2003, suffering from arthritis – unusual for a 6½ year-old sheep (or was she 12?). Now stuffed, she revolves on a plinth in the National Museum of Scotland, amid stories of Prometea the ‘horse’ (and its identical twin and mother, Stella Cometa) and other ever-hopeful clones-to-be, Thylacine, and (a little longer in tooth and tusk) the Woolly Mammoth.

It would be fun to think that we, as Spielberg suggested, could clone bits of DNA, but hard luck, time, and other thieves have not preserved the Jurassic amber so well. Yet, we have legend, lore and myth: why else is the Phoenix such an uplifting tale! Heaven knows, it makes more sense than the resurrection-myth purported by certain religions.

My sister once wrote out, as a calligraphy exercise, a passage attributed to Chief Seattle of the Dwarmish Tribe, about the everlasting presence of his people long after the white man has wiped them out. It seems there is more truth in myth than vice versa. As Elaine Feinstein (whose poem, ‘June’ I allude to below) says, ‘The dead are strong.’ 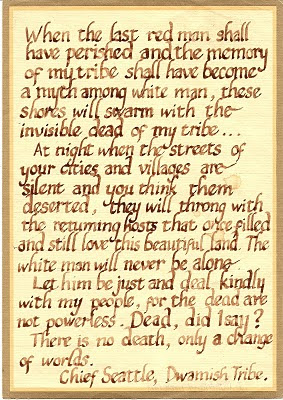 Beneath the Flower Moon the Phoenix rises.
From the dust of winter's ashes, from the clay?
A miracle as old as Lazarus, Persephone;
Flaring flower of a dried-out cactus in June.

The Phoenix has a handy device
above his counterpart amalgamates,
The Griffin, the Dragon, the cockatrice,
The Gryphon, the Quagga, the Wyvern, the Minotaur,
Thylacine the Tasmanian Wolf et al: ice
couldn't preserve the Unicorn with its spiral horn,
Yet the Phoenix, tried seven times in the fire,
continues, continues to rise.

Surely these pieces are purely inventions
played out as if on some chequered board
according to systems of human convention
- abstraction and emotion hold little regard
for the laws of nature, reality, fact nor fiction.

We cannot be foxier than the fox; the proud
Heraldic Lion is rampantly so (- two legs good,
the stubborn symbols, angry defensive arrogance),
Yet we learn the basic rules, throw the dice,
Compose our own music to join in the dance.

The Wolf lies down with the Lamb, the Cow and Bear
The Leopard and Kid, Lion and Calf and all the Brer
Creatures: cannot all of them jump over the moon?
How can the Infant jump over the Cockatrice' nest?

Because it is not written, but invented; allowed to rise,
the Phoenix will follow the cycle of bloom:
Flowering, fruiting, decomposed, rotted and hewn
to be cast onto Autumn's conspiratorial pyre,
Only to put, once again, its septennial trick to the test.

One thing is sure: come hell or high water, fair wind
or foul, high noon, full moon, November or June,
When the last red man shall have perished, and the
Memory of tribes become a myth among white men,
- on reflection, nothing but a change of worlds - the
Phoenix will flourish long after its author's demise.
Posted by Tin Angel at 16:28 No comments: Links to this post