Pouring Rain? Must be Festival in Edinburgh!

Anyone who has read this blog for a few years will perhaps remember that, during 2011, I wrote about my obsession with phone-boxes. To put this in a nutshell (though you’re welcome to plunder the archive) I started taking pictures of red phone-boxes when British telecom started to remove them from our streets and lanes.  I’ve taken hundreds of pictures over the years, randomly and without method. I’ve also been given plenty of phone-box tat (kind of serves me right) by friends who now associate me with the phone-box.

A couple of years ago, studying Creative Writing with the OU, in the ‘life-writing’ section of the course we were encouraged to find a ‘thread’ that might link episodes of our life-story. Naturally, I choose my old friend the phone-box. This has since unleashed a flow of creativity, including poetry, plays, and stories. I am keen to point out that, despite the association with the phone-box, none of my writing is about me. It is fiction. Why do I need to say this?

Cue advert for this year’s Festival. My show is in the PBH Free Festival, as part of the Spoken-Word strand that is now in its second year at the Edinburgh Fringe. I will be performing, with actor Ashley McLean, stories of unrequited love, jealousy, and abandonment, all set in, featuring, or mentioning that symbol of severed communication: the Phone-Box. I have performed some of these pieces over the last year or so, at events mentioned elsewhere on this blog. 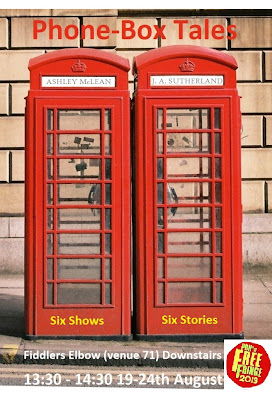 Besides bits of singing, reviewing, and flyering (for other shows as well as my own) I’ll be participating in a project called QUIET FOREST being put together by the spoken-word collective, Inky Fingers. On one day only, there will be a host of innovative installations of poetry in the Forest Café. My Gormley-inspired sequence, Walking on the Water, will be shown as poetry-and-photographs side-by-side, and possibly with a bit of background music. Maybe Antony Gormley himself will turn up! 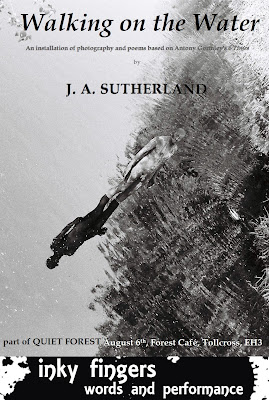 And finally, still basking in the glory of having won the Inky Fingers Bike-Poetry Slam last month with a three-part poem based on my short-story Spoke/Unspoken, I will be making my debut at the Edinburgh International Book Festival, reading that very story. Edinburgh is (though it barely needs spoken) a City of Literature, which is why I am pleased to be participating in the Edinburgh City of Literature ‘StoryShop,’ where emerging local writers get to perform their work in the Spiegeltent at 4pm during the Book Festival. I will be there on the last day: August 26th.


Anyway, that's enough blatant self-promotion. I’m off to photograph another phone-box…
Posted by Tin Angel at 13:04 No comments:

A week ago while resident at Holyrood, The Queen visited a place called Niddrie.  This may come as a surprise to those who know this area; it’s not what you’d call affluent, situated on Edinburgh’s inner-city, otherwise known as the ‘outer-ring.’ Nor is it the sort of neighbourhood where you’d leave anything in the back of your car – valuable or otherwise.


While much has been done to improve the area over the past ten years, knocking down most of the grey tower-blocks and building new, colourful housing, there are still stretches of wasteland, boarded-up shops and pubs, and signs of urban poverty that are hidden from, or largely unseen by Edinburgh’s tourists, Royal Visitors, and Festival-attendees.


There are also around Niddrie and Craigmillar various community centres and projects, the odd bit of modern art, a new library, and some hidden gems of historical and spiritual interest, some of which only come to light on Doors Open Days in September. One such place is the Thistle Foundation, a community for adults with special needs.


When only-child Robin Tudsbury (of the Blues and Royals – whatever that means) was on duty in the 2nd World War, his parents Lord and Lady Tudsbury were planning to set up a centre for ‘disabled ex-servicemen.’ Shortly before the war ended, Robin was killed in action, so his parents decided to build a chapel in his memory, naming it The Robin Chapel.

This Chapel – apart from being of great artistic value and beauty, with its simple, Baronial architecture, exquisite carvings, and stunning stained-glass depicting scenes from Bunyan’s A Pilgrim’s Progress – is a fitting tribute, in that it was set up to be a ‘non-denominational’ (what we now call, ecumenical) ‘temple of reconciliation.’ 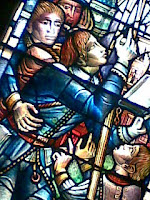 Glossing over the Royal connections, which interest me less than the military background, my part in this Official Visit – celebrating 60 years of the Thistle Foundation – was because in my ‘other life’ (as a professional singer) I am part of the choir that sings regularly in The Robin Chapel, performing music of a cathedral-style choral tradition.
I’ve made my thoughts clear on things Military and Monarchy elsewhere on this blog. Suffice it to say, I found the experience of singing God Save The Queen with the very women sitting a few feet away extremely surreal. Whether God (again, for my views, see elsewhere) poured bounteous gifts on her as we sang, it is hard to say. But I can report that for the duration of this ridiculous anthem, God did indeed save the Queen. Which was nice of God.


After The Queen and Prince Edward (who was kind enough to personally thank the choir) went off to visit less privileged people of Niddrie, we all got on with drinking The Thistle Foundation’s wine and eating salmon sandwiches. With her entourage of high security, accompanying military brass and heavy police presence dissipated, Niddrie-normality returned. One of our visitors (a former Robin Chapel musician) had had his car window smashed. 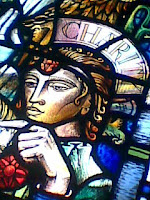 I guess The Queen, God, or any of Robin’s former Division couldn’t save that from happening. God’s promises to humankind are pretty vague without the vagaries of Church and State staking their claim. When God tried to wipe the slate clean with a cataclysmic flood, the subsequent rainbow was some kind of promise, apparently.


I see it this way: whatever social category, strata, or economic grade we belong to; whatever belief-system, or philosophy we subscribe to: we are all the same. God rains and shines on everyone. The amorphous rainbow is a sign perhaps that humans have the capacity for peace and reconciliation. That is why I choose to sing at The Robin Chapel. Long may it reign!


But while we wait for Kingdom Come, here’s this month’s offering from my poem-cycle:

Canto VII:  Seven is a popular numeral, but flawed by the imagination’s limitations.