Before the Fireworks finish off the month of Festivity and the Burghers of Edinburgh claim back their City, further down the East Coast, there will be sadness and, perhaps, celebration for a life of an artist whose work enjoyed a major retrospective exhibition on The Mound this year.

John Bellany was a maverick, a complex and extraordinary character for whom Life and Art were inextricably bound. I cannot start to describe how moving I find his paintings and his life-story. As a writer, I can only offer my poetic reaction to the portrait of his father, before which I have spent many hours contemplating the intensity of this expression of deep humanity.

This poem takes the form of the Lord's Prayer, and weaves it into a eulogy, not only for the artist's father, but also for all fathers, indeed, all parents. And, for that matter, all humanity, since we are all recipients of Art's legacy. In the case of John Bellany, we are truly gifted. 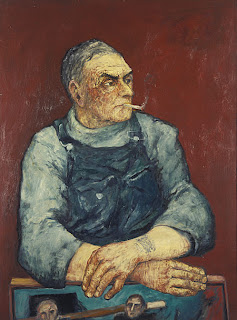 My Father, who is now in Heaven,


how we hallowed your name.


Your kingdom was the seas, but you


drifted into dry dock.  Earthed, your

Our Mother baked our daily bread


while you dredged manna


from the unforgiving oceans, fed


trespassed upon those depths

no more. Weren’t you ever tempted


to return? Your uxorious duty led


You to ink a blue tattoo; anchor your


devotion in a permanent inscription,


while you sat, marooned – Regal, yet

stripped of your omnipotent rigging –


to glory in a love that isn’t puffed up:


reflecting what you were, and all that He


instructed us to do; who sits at your right


hand on high and fished for all humanity.


Michael Haneke is one of my favourite film directors. His film, The White Ribbon would be in my top ten films – if I had such a list. It opens with a voice-over by an elderly-sounding narrator:

I do not know if the story I want to tell you is entirely true. Some of it, I know only by hearsay. After so many years, a lot of it is still obscure, and many questions remain unanswered.

As the film unfolds, and indeed, ends, the strange events that are acted and narrated are left unexplained. The audience is left to draw its own conclusions, if they are able.

If I say that everything I write is “utterly untrue,” I would be lying. According to one of the characters in my Phone-Box Tales, writing poetry is ‘a process, a craft, a sculpting of language.’  And it certainly isn’t auto-biographical, even though much poetry uses a 1st-person perspective, or a “persona.”

The same can be said for fiction. Writers cannot simply rely on undiluted imagination, romantic inspiration or plain perspiration. Instead, they beg, steal or burrow ideas; transpose, translate and transform them into lies that tell the reader, performer, or listener about the truth. Therefore, when I say that all my Phone-Box Tales are based on my own experiences, observations, overheard conversations, stolen snippets and scavenged stories; this is the truth. But the result?

Let others judge. Not with opinions, criticism, scepticism or malicious vitriol. Nor with that ridiculous star-rating that seems to plague reviewers and performers alike: at the Edinburgh Fringe, anything less than ★★★★ is hardly worth the cost of a staple to attach a scrap of paper to a flyer. But let the audience, when they hear my writing performed, decide how it moves them. Is what they hear believable, if not entirely credible? Does it generate laughter, anger, disgust, or guilty pleasure?

Hopefully, it will leave them with more unanswered questions. Such as: who reviewed this show as: ‘Utterly untrue’- ★★★★★ in throughtheturretwindow@blogspot.com ? Well, me, of course, just now. I challenge my audience to award stars according to their conscience. Meanwhile, I must go and buy some staples. 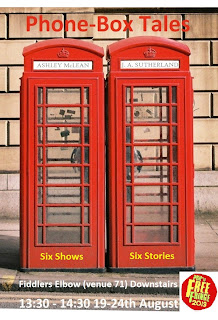 Tales of unrequited love, jealousy, and abandonment, all set in, featuring, or mentioning that symbol of severed communication: the Phone-Box.

Not suitable for children.
Nor adults, really.
Nor pets.

Venue 71, No. 4, Picardy Place, aka ‘The Fiddler’s Elbow,’ somewhere between Greenside Place and Broughton St.

I guess that's why they call it The Blues

So, we're half-way through August in the Festival City, when Art and Culture collide with politics and military might, not to mention a bag-full 'o pipes.  Earlier in the festivities a massive passenger-jet plane flew low over the castle. Only those who live here thought this unusual. If you live in, say, Hounslow in West London, low-flying planes are an everyday occurrence. This was, in fact, the maiden flight of the new Boeing 787, the 'Dreamliner.'


Yet, at the start of every Tattoo ‘performance’ – a military parade that is supposed to symbolise a celebration of the end of battle or fighting or hostility or whatever language you like to use to describe it – there is a fly-past of deadly, angry, lethal aircraft that cannot fail to draw attention to the crowds below, not only in the Tattoo Stadium.


For every cloud there is a silver lining. And, despite my revivified irritation and anger at the war-planes that fly over our city, I am glad that there are some who consider the incredible achievement and advancement of science that has led to the wonders of flight (not designed for violence) to be worthy of a Festival audience, even if most of those on the ground were oblivious or unaware that something incredible had happened in the skies above them.  I suppose most of them were too busy promoting their own shows. Or were, like the torturer's horse in Auden’s poem, busy scratching their bum while Icarus, having flown too close to the sun, fell from grace.


About suffering they were never wrong, The Old Masters.


Breaking from the festivities, in the next of my sequence of Blue poems, the word-play on the number eight is severely compromised by human activity: every celebration, achievement and accomplishment is annulled by our ability to deconstruct and maim. Even the ‘blues’ cannot find respite in music’s tempered scale. We all wear that theatrical disguise, where one mask is crying and the other, laughing. I could risk a cliché and say, two sides of the same coin. If only life were that simple.

"After the Feast," they said, "Let's give it eight days."

They named the month October, and added two more;


Divided the character two by four, then constructed the enneagram;


The elements split stably into octaves, the atom into a W.M.D;


The octahedron and octagon confounded the Rubik's Cube;


In octal notation, computers divided a base of eight implausibly by three;


And (in 1904) a piece of folded paper became an eight-page manifesto.


But they had music, and tempered the scale to a leap of twelve semitones.

Then someone invented the blues.