Three years ago I had the pleasure of appearing at the Edinburgh International Book Festival, to read my short-story about the love of two bicycles. As part of the 10-year celebration of running this ‘StoryShop’ slot for emerging writers, the Edinburgh City of Literature have resurrected some of the recorded highlights from the 2013 StoryShoppers. You can hear a brief clip from my story here…

And if you’d like to read the whole piece, printed in the form of a slam-poem, it is in Part One of this bicycle rant. But now, for Part Two, in which drivers of the BMW (one in particular) do not come off well.

When the agency, where I work from time to time, moved office from a convenient town-centre cycle-ride to a serious journey out to Davidson’s Mains, I was disappointed to find that the new premises lacked adequate cycle-storage. There was a car-park behind the buildings (which are shared with a few other firms) but at that point, no cycle-racks.


So I attached my bike to some railings at the back of buildings, in the car park, next to the back door of our company and another business, the accountant firm Haines Watts. The advantage being that my bicycle was well-hidden from the road, visible from my desk, and 3 seconds from the door. Sadly, it seemed this was unacceptable to someone in the accountancy firm.

A memo was passed around regarding cycle-parking; apparently we were not to attach bikes to these railings. My firm was told that, if they wanted to relinquish a parking space, they could put up a cycle-rack. They chose not to. A short while later, in a parking-space fit for half a smart-car, a cycle-rack appeared. Great, I thought: a sensible solution. However, when I saw this sign, I continued to use the railings by the back door.

This was followed by a series of notes sellotaped to my bike-frame, another tied to the railings, asking me (or anybody) not to place my bicycle 3 seconds away from the door to our own offices. Meanwhile, my company spoke with the charity centre nearby to see if we could use their bike-racks. They generously obliged.

But out of spite, annoyance, or bloody-mindedness, I persisted. Why should I have to walk an extra three minutes when there seemed, to me, no reason why I shouldn’t leave my bike in a safe, visible and convenient place? Eventually, the answer came. 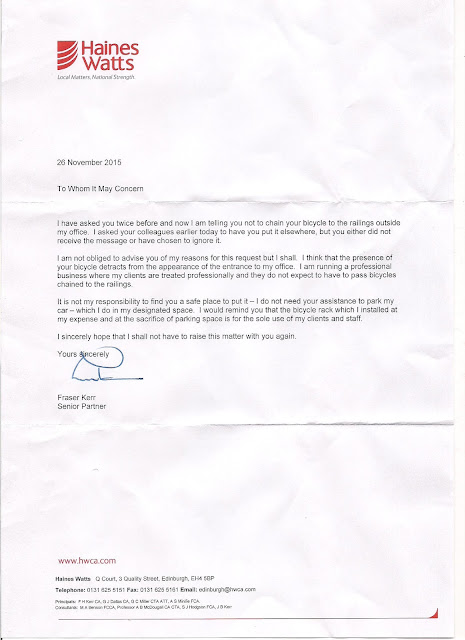 And this was my reply:


Your note dated 26 November 2015, attached to my bicycle, was insulting and offensive. When the office of [company name] moved to Quality Street earlier this year, I chose to attach my bike to the railings where it was least vulnerable to attack and where I could see it from my desk. Bicycles are easy targets for vandals and thieves. Two weeks ago somebody stole the seat-post, saddle, mudguard and lights from my bike because it was in a vulnerable place. This cost me £50 in repair and replacements; not the sort of expense I expect to incur when I cycle to work. The ‘cycle-to-work’ scheme is at risk of being scrapped by the current Government, and it seems that you concur with its in-sensibility by reacting with such egregious comments about cyclists and their bikes.


Perhaps you hold quite a different view to me in terms of a company’s reputation for the practice of favouring cycling over other transport. I cannot see how your clients would feel that the presence of a bicycle, securely attached to a railing, would compromise their view of your professionalism, or imply that you were treating them poorly. Do your clients really state or insinuate that they “do not expect to have to pass bicycles chained to the railings?” I imagine that, if your clients knew of your petty behaviour in this matter, they would be less impressed with you than your opinion that the presence of a bicycle “detracts from the appearance of the entrance” to your office. Given that this is the rear entrance to your office, I hardly see this is the situation in any case.


You may feel that it has been rude of me to ignore your requests to “kindly refrain” from placing my bike on the railings. I, however, feel that your conduct has shown disrespect for your neighbouring offices. I regret that I didn’t have the opportunity to discuss this with you in person. However, attaching anonymous notes to bicycles rather than finding a courteous solution smacks not only of unprofessional conduct, but also, of student flatmate behaviour. Installing a cycle-rack (which has “sacrificed” but a half-sized parking space) and going to extra expense with signage forbidding users other than from your own company demonstrates a disrespect that goes beyond uncharitable.


I have learned that the company I work for has requested the use of cycle-parking facilities with the Sycamore Tree Centre, whose premises are adjacent to our offices, and that they have been happy to oblige. Given this centre is a charity, it makes your stance look even more parsimonious. It is neither your responsibility, nor my own company’s, to find me a safe place to put my bike. It is great that you have a designated space for your car. I pay council taxes so that I can travel by road and attach my bike in a public place. If your railings are not a public place, it would have been polite if you could have advised me of this sooner. As far as car-parking goes, the blue BMW that rests with the rear of the car protruding well-beyond the back of the parking space, causing difficulties for other users of the car-park, it seems that car-parking assistance would not go amiss.


It behoves me to point out that safe cycle-parking is not illegal, but criminal damage is. I have taken immense care to ensure that damage is caused neither to my bicycle nor to the railings. The three instances in which someone from your firm has taped notes to the frame of my bike have caused damage to the chrome paint. This is quite unacceptable. However, I would – without prejudice – like to invite you, in a gesture of goodwill, to allow me to use the cycle-rack you have installed. Having seen only one bicycle attached to this structure, it appears not to be over-subscribed. If you would like to engage in an adult, professional, more charitable conversation, I would be willing to respond.


If not, then I’m sure the various BUGs (Bicycle User Groups) such as Cycling Scotland, Sustrans, Spokes, and the City of Edinburgh Council’s Cycle Forum would be interested in this story. I will end my letter sincerely, even though you didn’t have the etiquette to sign off ‘faithfully’ to the person to whom this concerns. It is of no concern to the company for whom I work, and I would ask that you do not contact them regarding this issue. You are evidently interested in ‘National Strength,’ but not of ‘Local Matters.’ I hope you might demonstrate that your slogan has some integrity. 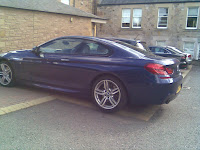 It was easy to discover that the owner of the badly-parked BMW was the author of the letter. Far from having the courtesy to respond to my riposte, he further bad-mouthed me when, a while later, an unfortunate event resulted in the buildings being evacuated due to a fire alarm caused by a toaster in our office.


According to an undisclosed source, Mr Kerr, peeved at the loss of income caused by the fire alarm, said, “I bet it was that bloody cyclist.” Well, it transpired that the toaster had a charred piece of burned sultana from – allegedly – the fruit-bread I had brought in for my mid-morning snack. Sorry about that. But I’m not sorry for posting this two-part rant on people who disrespect cyclists.


It would be interesting to know what other bicycle-users and groups think of this. Perhaps there will be a revolution!

But, as we know, the revolution will not be motorised.