A few months ago I sang at a funeral where the family of the deceased requested a piece of music that I was uncomfortable with. I’m known for not being a fan of Elgar, and his Enigma Variations come pretty low in my appreciation of his music. While I accept it has its merit as an orchestral piece, I detest subsequent “arrangements” of the work; in particular the most famous movement, Nimrod – whether for organ, brass band, or recorder ensemble.
Even more hideous is when someone superimposes text onto a purely instrumental piece. The version of ‘Nimrod’ that we performed at this funeral had had the words of the Requiem Mass wedged under the notes of an 8-part, a cappella vocal rendition. Whatever my opinion of him, Elgar was a great composer who I doubt would have approved of this treatment of a piece of music that was presented as an “enigma” – whatever he meant by that.
A similar situation can be applied to Gustav Holst, whose secular music ended up as a patriotic hymn. In this case the composer, on being asked to set to music words of Cecil Spring Rice, was too busy... but found that the broad, augmented melody at the centre of the ‘Jupiter’ movement of The Planets more or less fitted. I guess even a genius like Holst can sell out.
Ironically, Lady Diana chose this hymn for a particular service in which her ‘vows’ to either her country or her husband-to-be seemed pretty lightly proffered. And when Princess Diana came to her untimely end, as well as that hymn at her funeral, Elton John and Bernie Taupin felt moved to re-word their threnody in honour of Marilyn Monroe into a sycophantic eulogy to ‘England’s Rose.’
Another piece that has suffered from being worded-in is the haunting and climactic string-writing of Barber’s Adagio for Strings which most people know from the full string orchestra version. Others will know the arrangement that, like Elgar’s Nimrod, has had words (in this case, the Agnus Dei) shoe-horned into a choral arrangement. The original, in fact, is the second movement of his String Quartet, Op 11, which gives a far cleaner and somehow more intense reading of this incredible piece of harmonic tension/release tease.
When the Twin Towers of New York’s famous skyline were felled in perhaps the most extraordinarily well-crafted pieces of modern warfare, the news media played into the hands of the terrorists by fetishizing the violence with over-emotive reportage. The images of planes thwacking into buildings, people jumping to their deaths, the panic and smoke and wailing of sirens: all too often they were accompanied by the emotionally-charged, soupy strings of Barber’s Adagio – tugging at the heart-strings of an already fucked-up national pride.
However, there was another piece of music that was used as an aural backdrop to these moving pictures of devastation, which I suspect fewer people picked up on. It was the opening of Michael Tippett’s choral masterpiece, A Child of Our Time. If my memory serves me well, the music dipped before the telling words announced: ‘The world turns on its dark side.’ Indeed, it had – not least in what we were seeing on our screens. More apposite was the next line of Tippett’s text: 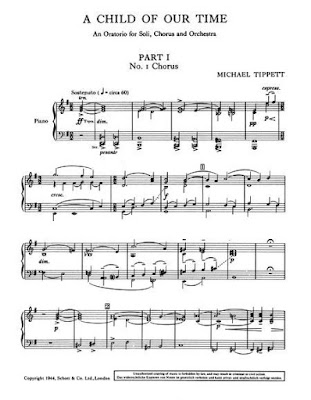 I’ve been reminded of this lately as we’ve seen America turn, yet again, into darker times. The election of Trump as President has been almost surreal, and yet scarily real as he has pursued his election promises with frightening voracity. Humans are notoriously bad at learning lessons from the past. On Radio 3 this week, a discussion on Walt Whitman suggested that Americans might do well to re-read that poet’s appraisal of Abraham Lincoln, in the poem ‘O Captain, my Captain.’
More recently the words of Gil Scott Heron’s song Winter in America, have been ringing in my ears. They ring as true today as they did over forty years ago.
And I see the robins
Perched in barren treetops
Watching last-ditch racists marching across the floor
But just like the peace sign that vanished in our dreams
Never had a chance to grow.
In Britain, we face another political meltdown as we prepare for a General Election based entirely on political machinations instead of the wants and needs of a divided country. And, for that matter, a divided Europe; a divided world. When someone as deluded as Trump has as light a finger on his twitter-feed as the nuclear button; when Theresa May can announce a snap election on the basis of colossal and dangerous (im)potency, and while North Korea is playing with bombs like a teenager with a PS4, we are on the brink of a dangerous war.
This is some of what Gil Scott Heron said in the liner notes of his album, back in 1974 – again, we ought to (but probably won’t) listen to the lessons of the past:
Winter is a metaphor: a term not only used to describe the season of ice, but the period of our lives through which we are travelling. In our hearts we feel that spring is just around the corner: a spring of brotherhood and united spirits.... Everyone is moving, searching. There is a restlessness within our souls that keeps us questioning, discovering and struggling against a system that will not allow us space and time for fresh expression... I have many things to tell you about tomorrow’s love and light. We will see you in Spring.
Rather than ending this morose and morbid post with further misery, I will pick up on the hope expressed in the passage above. Last autumn, a good friend ‘disappeared’ from my life for a season – I won’t explain why – let’s just say, for personal reasons. She promised (like Persephone, although I’m not saying she had a date with Hades) to return in spring. In Scotland, however, spring can be pretty elusive – as these three poems illustrate.
Three Seasonal Poems
for e
Repentance
Ash Wednesday, the first day of Lent
These Lenten Lilies –
primroses, narcissi, daffodils
and other deathly jonquils –
arrive unseasonably late
in our northern climate.
With little time to live,
whether they survive
to see the crucifixion
or even, resurrection,
is entirely dependent
on when the penitent
season begins; according
to the moon, if not to spring.
Forgive my poor self-will.
They say what doesn’t kill
you makes you stronger.
At least in Scotland
Spring lasts longer.


Banishment
Vernal Equinox – spring begins
You could call it irony, or paradox,
that after yesterday’s spring equinox
the cashmere scarf you gave me came
in handy yet again. For as the planet
tilted out of winter, the mocking
Scottish weather had deposited
white veins in the black crevices
among the distant hills. Crocuses,
daffodils, and snowdrops stood
defiant (only the latter flower knew
itself as fraudulent.) The wind blew
with its jagged edge; I wrapped
your scarf around me tighter,
hoping that you might arrive
to see the colours of the season,
and not the black and white.
Last year, it was just the same.
I wore your scarf right up ’til May,
Oh Proserpina, Oh Persephone,
longing for you to return to me.
But, as Spring, you never came...


Short-lived
British Summertime Begins
Having (just about) survived
the Ides of March, and having seen
the Vernal Equinox out-foxed by snow,
I then received a text to say
that ‘spring is here’ which meant –
if nothing else – that you are near.
‘Thank God,’ I cried, then realised
I’ve long denied any deific significance
in weather-patterns. Your existence
is enough for gods to shut their gobs:
you are as constant as the Northern Star,
even when summer sun summons the ha’ar.
Let’s hope, as the coming months unfold, that summer won’t be obscured by the cold, grey sea-mist that tends to envelope my city after a warm day. There is too much going on in our world to remind us of winter. Despite the bleak opening of Tippett’s A Child of our Time, he prefaces the score with words from T.S. Eliot: “... the darkness declares the glory of light”
As I say, again: let’s hope so.
Posted by Tin Angel at 09:59 No comments: Links to this post