October - a Month of Five Quarters

As I walked out last Autumn Evening (okay, I cycled if truth be told… this is parody, not paradox) there was a clean, silver disk in the sky above the Stadium. It perched behind the pinked clouds of a sepia season, brighter than the sun that sank behind Sainsbury’s (shut this week for refurbishment, and so I ventured in the opposite direction for my messages – not from the moon, but Morrison’s.)


Luckily, as I returned home by the light of the Hunter’s Moon, as it’s commonly known (the harvest, done) my catch had not wept itself into oblivion, although something had leaked into the lining of my rucksack. Probably the out-of-date fish I’d plucked from the yellow sticker department. Or worse, it was milk, spilt from the impenetrable plastic carton. Still, no point crying over it, they say. 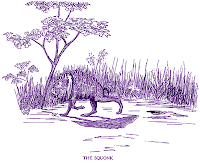 Tell that to this month’s animal from my select menagerie, the ‘Squonk.’ He’s a tricky chap to write a pretty poem on. If he exists at all! He doesn’t appear much in literature to my knowledge; isn’t part of Native American lore, and features mainly in lyrics by two great rock groups. The first song, alluded to elsewhere in this sequence, is by a band who took their name from a strap-on-device coined in The Naked Lunch. (Or is that just rock-and-roll myth? Who can be trusted!) 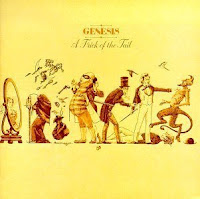 The second is from the first post-Gabriel album by Genesis, the title of which is alluded to in this poem. The song, ‘Squonk’ was the audition piece that thrust or catapulted Phil Collins from cockney drummer to Front Man (and, alack, song-writer, thus demoting Genesis from the nomenclature of Rock Band to mere pop-group. Discuss.) This highly imaginative album, though, was concerned with the uncanny paradox that lies in the super-existential world of the Imagination: is it true, or false.

"squonk"
More like a blubbery, blubbing crocodile,
if you ask me;

self-pitying, self-effacing, self-mutilating,
his form and being amorphous as the
red-alert moon that chases him
through the forest to his pool of tears:

some reserve, squonk.
His trail is like an old-fashioned paper-chase,
crisp white petals of confetti
dissolved into mulch
overnight, tinged only with morning frost.

A funny fish you are, or reptile or bird,
ugly duckling, chicken all right
- corn-fed no doubt -
yellow enough to be - or not to,
pending your state of fear:
live or dead you're an easy catch,
a trick of the tail and you're in the sack.

I only wanted to be your friend,
yet you spread your maudlin like ointment,
never offering to mop up my tears with your fur;
no condolence in your snuffling, grunting,
shuffling around to be let out of the bag:
gushing forth repentant, acquiescent,
a dribbling pool of aqueous misery.

No doubt you'll re-emerge; like father like son
your whimpering tadpole will turn to a
Munch-like scream, legs, arms writhing,
to evolve this time into more than the
cupboard love crocodile,
preying without pity,
praying without fear,
toughened, no more tears.

true-or-false squonk.
Posted by Tin Angel at 11:08 No comments: Links to this post