Endangered – but not dead (yet)

At the moment, the streets of are dotted with brightly coloured models of endangered animals. It’s a bit like the Cow Parade, only now there are tigers, elephants, crocodiles and exotic birds I cannot name. But spare a thought for the good old telephone box, I say: it’s been in danger for some twenty years or more, ever since Thatcher got her evil claws in and sold off what we rightly owned, even the very water from the sky.

But could they have made the film Local Hero without that iconic landmark?  Even Doctor Who has resorted to its lure. Think of all its uses, besides making that all-important phone-call when your mobile’s out of battery. What other booth has been so perfectly designed to provide adequate cover to urinate, procreate, or change into a superhero?


And to prove it, Innocent Smoothie pays homage to the humble phone-box, with its cut-out superhero movie kit printed on the side of the 750ml mango and passion fruit carton. 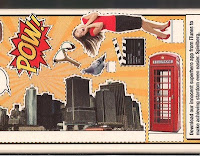 Need we any more evidence: the phone-box is here to stay.
And Thatcher? (Is she dead yet? Check here:) http://www.isthatcherdeadyet.co.uk/

Posted by Tin Angel at 11:21 No comments: Links to this post

A Whimper, not a Bang

September begins, Edinburgh empties, Festival ends and melancholy rain sets in. I’d like to think that all the recent joie-de-vivre leaves ones cup of creativity half-full, even if ones double-bed remains half-empty. The picture on my Innocent Smoothie at first glance looks like a fringe-flyer, emphasising the reality of singledom. Along with the dubious assertion that the carton is, lacking a ringpull, saving the planet, there is an equally spurious claim that “True love awaits [yea, even] in the supermarket.”

I wonder how many 2011 Fringe shows contained ukuleles and sketches on internet dating. The first piece of drama I saw this year was about the latter subject, and was in my opinion extremely well-written and convincingly performed. I’ll be upfront: my reason for going was not the flier (now buried under a pile of an hundred others on my dining-room table) but the girl who handed it to me.  When she saw me again a few days later, I tried to play it cool by giving a ‘luke-warm’ response to her play. What a fool!
I never saw her again, on any of my subsequent lunch-hour strolls. My wish to give more positive feedback fell, like most fringe leaflets, underfoot.  “But that’s what Facebook’s for!” I hear you holler. (Actually, I’m only convincing myself that, if you exist at all, you are reading this.)  ‘For what?’ I respond: ‘Stalking strangers online?’ There’s bound to be a Fringe play on that, if not a forthcoming production at the English National Opera. And that’s the very reason why this blog is anonymous, and why I’m not on Facebook. (or if I am, I’m not telling you.)
Where does this leave me?

In better place than I was four years ago, when I wrote a poem about the Fireworks that summon the season of mists?  Perhaps.  I’ve heard there’s a code of conduct for cruising in supermarkets; certain aisles suit certain tastes. I’m not sure if I should lurk among the fresh fruit & veg, or the frozen meat section; stand by the savoury packets or hover hopefully by the sweets & biscuits.  One thing is for sure: the fridges are out of the question. Smoothies may be saving the planet, but they’re too cool for me. I guess it’s back to the Bombay Sapphire, the ever-dwindling embers of Festival, and a distant whimper of a voice, lodged somewhere between my memory and the chink of ice in a glass.
Fill it right up, imaginary barman.
Posted by Tin Angel at 02:31 No comments: Links to this post