This year boasts an unlikely, or unlucky, abundance of Fridays the Thirteenth.  I’m not superstitious, but looking around the , it seems that plenty of folk have been in the past.  So I have taken for the next of my 26 Treasures a tiny piece that seems to have ‘luck’ woven into its name.
‘Luckenbooths’ were originally lockable market-booths selling cheap trinkets along ’s Royal Mile: so no luck there.  But this little brooch provided protection from supernatural forces (such as the ‘evil eye’ that I alluded to on the last Friday 13th) and was intended to help charm a nursing mother’s milk.
Legend has it that Queen Mary gave a luckenbooth charm to Lord Darnley... .
Tomorrow, someone I used to know quite well is getting married.  I can’t deny a pang of envy, but wish them luck all the same.  A. E. Housman said, ‘give crowns and pounds and guineas, but not your heart away.’  If only I’d heeded that advice those years ago, as I sat drinking gin on a warm sofa with a certain soprano. 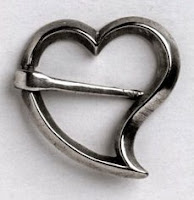 “Here: take it my dear;
pop it inside your lapel.
Let the delicate heart press
against your white breast,
to charm or sustain you;
no evil can harm you,
from this day forth
for the rest of your life.”

So she took it.
And he took her for a wife.
I locked up my booth, heavy-hearted.
Out of luck, love-locked-out, I departed.
Posted by Tin Angel at 15:22 No comments:

How do Christians cope with Good Friday?  They proclaim that Christ was killed on the cross and pretend for a day or two that this was the end.  And then, hey presto, up he pops again, conquering death – allegedly.  To take this myth as literal is absurd and yet, the power of the Easter Narrative has given us some of the greatest works of Art.  If I have any belief in eternal life, it is that the truths behind the Gospel stories remain as vital as they have always been.

The Fetternear Banner dates from the 16th C. and has remained in remarkably good fettle for some 500 years.  Most of the dyes, using vegetable dyestuffs, have retained their vibrant colours; and the double-sided stitching (a costly process) using silk threads has only been eroded where iron dyes were used for creating black thread.  There are many familiar symbols – the scallop shell, the dice, the reed, the cockerel – but the most striking element is in the characters. And it is these people with whom we continue to identify, to this day.

Christ’s flagellated body is gruesome; Judas’s purse around his neck becomes a noose as he dolefully contemplates his fate; and the scornful look of the Spitting Jew as he puckers up to hurl his insult at Christ is pitiful, on many levels.  I cannot hope to compete with John Donne’s Holy Sonnet XI, but have attempted, in the spirit of the metaphysical, a pun on die/dying/dye.  Even if we don’t believe in what some think the church calls God, we still have Art, for all eternity.

Stitched up, whipped against a pillar,
flayed and frayed I felt his wounds.
Cockerels crew against the clamour

of spitting Jews; I gobbed my phlegm
at the Kirk by the Heart of .
Pincers ripped out nails secured by hammer;

a Dove descended as the dye was cast.