A Year of Indian Moons


Moon phases fascinate us. Ancient civilizations based their calendars on them, the Old Testament told us to blow the trumpet in the new moon, and Christians choose the date of Easter by the first full moon that falls after the vernal equinox.

The moon is strong: it pulls on tides and other sap and moistures, inspires poets, piano pieces and pop-songs; its dark side (apparently) influences the seeds of our unconscious, and illuminates the thin veil of truth between lunacy and genius.

In the year of my birth, on the day that I was born there was, I have discovered, a Full Moon. Native American Tribes call the full moons various names; this idea inspired me to write a sequence of poems about the mystery of the Imagination.

So here is a poem about a dog that I wholly believe in, even if Charles M. Schulz denies his existence. What does he know! Anyway, I’m off to howl at the moon. 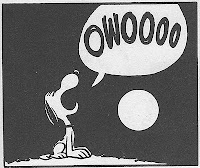 Snoopy sits on his kennel top,
Howling at the moon.
Like no other dog he feels the cold,
and his digitally accurate internal clock
knows it's suppertime,

so he sings for it, with plaintive tone.
It wails across the neighbourhood
towards his distant ancestors, to mock
their envy of his absurdly luxurious manner.

By day, he's a party animal,
Lord of his manor, ace pilot, quarter back,
Easter Beagle, champion pitcher,
Planting his wet kisses on Lucy,
Dancing his manic jig to the Moonlight Sonata!
Now he curses his moonlit solitude,
Deserted by his nominal Master.

He's everyone's dog, you know,
not some miraculous creation
or bionic pencil-sketch.
Not so: his real master picks up his pen and
demotes the miracle, delineates the lineage,
deludes the illusion.

- Snoopy's not a real dog, he maintains:
he's an image of what people would like a dog to be.

You blockhead, Charlie Brown.
Posted by Tin Angel at 06:18 No comments: Links to this post

The Dying of the Year

It is never a good thing to have to explain a poem, but the following one has, like many, a story behind it. It also contains a few musical terms, so I will append a glossary to save you having to trawl Wiki-sites, or look up your old Grade 5 Theory book.

I was at a party at one of those strange houses that one finds in Edinburgh’s South Side, best described as an architectural experiment. A combination of Art Deco and 1970s kitsch, it had brown wall panels and wall-sized windows that would have made the puritans proud – were they not facing an inner courtyard. From the street, it just looked like a wooden box, covered in foliage.

In one of the rooms of this inverted fish-tank, there was a rather rigid and lonely lizard in a glass cage. According to the hosts, it was so old they couldn’t remember what they (or the children, long-since flown) had called it. It seemed so sad that my friend (a violinist) and I both decided to write a poem for him.

This was my attempt, which I post here to reflect the dying of a decade, and as a pre-curser to my next selection of poems, which are all about fantastical creatures. I will post these poems over the coming year, a year of full moons that began with a blue one.

A creature called a gecko
Played the violin.
It was hard for him:
He came from the Nevada Desert
Where everything was secco.

It pained him in the neck – O
How he wished his
Long-limbed lizard fingers
Played the full length of the bow
A melody legato.

Now his home is just an echo
Of that North American Plain.
And though he oughtn’t complain
In his glass-fronted bungalow
It’s an uninspired existence Art Deco.

He hasn’t even got a name,
The sad, dried-out amphibian.
His sandy scales lack a leading-note:
Morendo, mixolydian.

Morendo – dying away
Secco – dryly, without resonance
Legato – smoothly, un-detached
Leading-note – the seventh note of the Ionian (major) scale
Mixolydian – a ‘natural’ scale or ‘mode’, as if played from G to G
(therefore, with a ‘flat’ leading note, being a whole-tone interval)
Posted by Tin Angel at 09:19 No comments: Links to this post