This week I had an email from a charity that I have supported for all my (adult) life: Amnesty International. 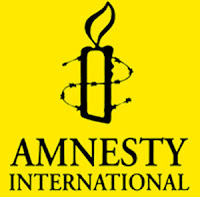 Their work to uphold human rights ticks all the boxes of my life-view which is perhaps best described as humanistic. False imprisonment, gun violence, the death penalty, the ill-treatment of those dispossessed, and violence against women are all things that Amnesty International stands against.
And I do also.
It seems absurd, in the eighteenth year of the twenty-first century, that Amnesty International’s e-mails have contained grave warnings about one man. The implication is that the President Elect (who, by the time I publish this, will be The President) cares little for the values, projects, and principles of one the most important defenders of human rights. The fear is that these ‘rights’ will soon turn to ‘wrongs.’
While I don’t want to say anything particularly erudite or intellectual about this situation, I feel I must – as a writer and performer – add my syllables. The email I received from Amnesty International linked to a Facebook event; a Protest March being held in my home city of Edinburgh, in sympathy with the women’s march taking part in Washington DC on the day after Trump’s Inauguration.
I already knew about the Washington March and was quick to write a poem, following a prompt from several publishers for poems about the new regime. Like many ‘political’ poems it will quickly be out of date – in fact, as soon as I post this blog.
I have performed the poem several times already, to responsive audiences. But the issues that lie behind this poem will not go away. 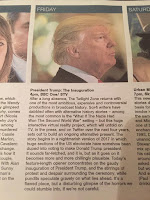 We are entering strange times, as even the newspapers
(who cannot be trusted, but)
agree.
We must stand alongside the dispossessed. In solidarity.

We shall not sleep, but we shall all be changed.

In the twinkling of an eye, at the last trumpet.

I made a little robot, and called him Robot Trump.
He was an average robot, but turned into a cunt.
I gave him human attributes – freedom, volition, and choice.
Sadly, I also gave him a cock, and a whiny little voice.
This robot looked vaguely human; it had arms and legs and a mouth.
But its face became a rictus, and its hair went north, west, and south.
Robot Trump travelled to Scotland where he trampled all over the land.
It was much more than a golf course and a few hotels he’d planned.
He sidled up to the (former) Leader of the Scottish Nationalists.
But his balls ended up in the bunker: Aberdeenshire was pretty pissed.
So he beat a retreat to America, on course for more than just golf....
Meanwhile, in the British Courts was a TV-celebrity, Rolf.
Harris was his surname; his catch-phrase, “Can you see what it is yet?”
Indeed, the bigger picture is that women don’t tend to forget.
Harris came from an age when groping was seen as normative.
Like Trump, the balance of locker-room talk and abuse is only relative.
So Randy Rolf’s in jail, while Robot Trump’s about to be sworn in,
not by a jury of his peers but – sorry, I’ve given you no warning –
by his beloved country, as President of the Empire State.
Howcome? By whipping up a campaign of misogyny and hate.
Robot Trump stood with its rictal mouth, hair coiffured like a cappuccino,
and ripped into the ‘untouchables’ – Mexican, Black, Muslim, Latino.
While most Statespeople build bridges that liberate nations, to enthral
his fans, Robot Trump declared his intention: “Let’s build a WALL!”
Ever since Hadrian, walls have been built to fence the Nationalists in,
and keep the foreigners out – think of China, Israel, and Berlin.
Trouble is, people believed my Robot. In these times of post-truth,
Trump even claimed that, of climate change, there is no actual proof.
But things were getting warmer with the hot air of his rhetoric;
America wasn’t getting taken in; America was being gas-lit.
Trump was a Major League Arsehole – much like his predecessor –
yet unlike Bush, Trump was a dangerous bully; a fascist aggressor.
If anyone didn’t agree with him, he’d get them turfed out by security,
or he’d mercilessly mock them – especially those with a “disability.”
When up against his – yes, woman – opponent in the TV debate,
He’d stand directly behind her as she spoke, just to intimidate.
Robot Trump, I must admit, wasn’t provided with eloquent charm,
So he’d simply invent his multisyllabic words without any qualm.
We should have heard a bell ring when he made up ‘braggadocious,’
for the most alarming of his claims was nothing less than atrocious:
He seemed to think it normal or acceptable, that a man grabbing
a woman’s private parts is – less-than criminal – well-worth bragging.
Like every abuser of women, he sought right away to minimise.
But as we all know, the intention is the potential action’s disguise.
Instead of accepting with dignity and acknowledging his great ‘fail,’
He threatened to put his opponent (with Rolf Harris?) into jail.
It seems, like Frankenstein, I had created an unpleasant creature;
one that defied what is generally acceptable to human nature.
Luckily, I’m just a poet, and Robot Trump, ficticious. No, wait?
This is actually real? My god! Do something, before it is too late.
Women, and men also in solidarity, congregate at Capitol Hill,
and march, hand-in-hand, arm-in-arm, round and round until
the foundations of Trump’s fake Jericho are feeling less-than fast,
then bring the walls of his folly tumbling down with a blast.
Sound the trumpet, ring a bell, make your voice heard, and let
this idiotic Robotic President know that women do not forget.
Posted by Tin Angel at 13:40 No comments: Links to this post