Now here’s a tale, tricky but true, from some time after 1992. I was doing a choir-tour of the chapels and churches of Southern England, a busman’s summer holiday. We were staying in none-too illustrious hostels and boarding-houses of opulent public schools; performing to relatively appreciative geriatric audiences, and imbibing the local beer (apart from the busman). 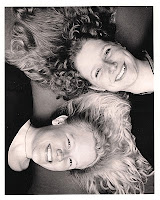 During our stay In Bryanston School, we inhabited the Girls’ Dormitory - relishing the rare opportunity to impersonate the 13th Duke of Wybourne (with my reputation? - scandalous!) Searching for spoils, a friend and I found a handful of black and white photos tucked away; the outcome of a 6th form photography project, left behind. One could assume the pupils had left too.


My friend and I thought they were great pictures, too good to be 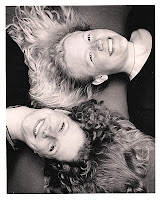 abandoned. So we took them away with us. The only clue to their ownership or perhaps the subject was the names scribbled on the back. My reaction to this mystery was to write a piece of music, Six Variations for Voice and Clarinet, dedicated ‘to Polly and Alex, wherever they may be’. Their image, transfigured, like the transient ghosts of the imagination, was all I had. Yet Alex and Polly exist, surely?


Last Sunday was the Feast of the Transfiguration, when all that is ghostly comes to seem real – or vice versa. To me, it was an Ordinary Sunday (in the Sondheim sense) – except that I trashed the ghastly 1980s fitted cupboards in my spare bedroom. It had been a long time coming (I blame Thatcher), precipitated by the precipitation from the flat above that had sent my ceiling crumbling.

And should the turret crumble: no great loss.


Yesterday was Ash Wednesday; the day to bury all one’s previous misgivings in a heap of self-flagellation. I could spend the rest of my life heaping ashen guilt upon my self, or I could just leave it to the tabloids to dress me with the sackcloth of eternity. Fuck them: I made my plea. Yes, I stole those pictures, but I did not take them. If anyone can identify the image - shooter or shot -let me know, if you can or dare. I will repay my debt – to whomever it is due.


For now, consider it lent.