So, the Olympic Torch has arrived, and today the Edinburgh Marathon
took place, thanks to the tram-works, mainly outwith the city. It
should have been called the East Lothian Marathon.  Yesterday I cycled
the route along the coast, stopping to take photos, scribble notes,
and eat a fish supper by the seashore; then ended the day with a pint
on Portobello Promenade as the pink sun sank through purple skies over
Fife.  Surely a better way to celebrate being in Scotland than running
for 26 miles!
I care little for sport, so feel disinclined to write much about it.
But a quick glance around the Sporting Hall of Fame in the Museum of
Scotland demonstrates how Nationalism and sport are hard-wired into
the collective psyche.  Wouldn’t it be better to define these fine
people by their sporting prowess or achievements, rather than by their
Scottishness?  But there are rules; conditions of entry to such a
hallowed place: you have to be Scottish – whatever that means. 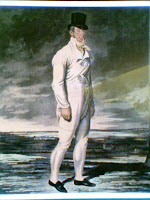 Having recently read Bill Bryson’s A Walk in the Woods, his story
about not quite walking the Appalachian Trail with an over-weight
reformed alcoholic called Stephen Katz, I thought it might be
interesting to ponder what Bryson might ask Captain Robert Barclay
Allerdice, whose claim to fame was pretty unimpressive on the surface.
He walked.  Well, I suppose, given Scotland’s unhealthy reputation, a
good walk wouldn’t be such a bad thing.
(and that’s from someone who just waxed lyrical about fish & chips
and beer, albeit soaked in sunshine, if not salt & sauce….)

A Walk in the Woods?
“And what did you do?” inquired Bryson, post-mortal in the Hall of Fame.
“I walked, in the main.”
“Hey – me too! Did you do the ?”
“No, the West Highland Way,” came Allerdice’s nippy reply.
“Any Bears?” asked Bill, hopeful.
“We’ve had no bears for 600 years. My dog was my only companion.”
“Ah. I had Katz,” said Bill, realising his mistake.