Before the full moon wanes its wintry way towards the shortest day, and the days themselves descend towards the year’s end, here is my final contribution.
I began this year’s blog entries by saying that one oughtn’t to ‘explain’ a poem - then went on to do just that!  This, the last piece of my twelve-poem cycle, An Imaginary Menagerie, is possibly the saddest poem I have ever written and, in this respect, perhaps the most personal. Best, then, that I leave it to speak for itself.
If you would like to look up some stuff on Edward Lear, this might give you some of idea of what lay behind the composition. Otherwise, just read it as it is, or interpret it as a photograph, or piece of music, or stone whose meaning is entirely in the eye, or ear, or hands of the beholder. 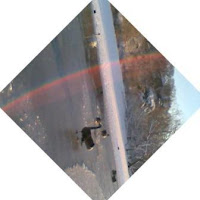 Moon Phases, December 2010
New Moon – December 5, 17:36
First Quarter – December 13, 13:59
Full Moon – December 21, 08:13
Last Quarter – December 28, 04:18
DECEMBER: Her Winter Houses Moon
The Yonghi-Bonghi-Bo.
Midwinter, and the garden's lake
is petrified to a pool of frozen tears;
a solid silver dish, impenetrable
from above or below by light or dark.
Alone in his Karmic Ivory Tower sits
Lear, with his myriad of nonsenses:
unmarried, impoverished, sedentary,
mind running faster than pulse.
His consists of Bong Trees,
and his serpent less feared or revered
than the Yonghi-bonghi-bo,
Quangle-Wangle, Pobble and Dong.
He named the creatures; his crazy
cosmogony merely a foil to his
sad, self-depricatory sense of humour,
hewn from his ornithological pursuits.
To this end, he refused the fruit,
alleging enforced solitude to be
the sole route to creativity: travel,
his companion, escape his destination.
Yet once, this journey took him to the
land of myth, where one strange siren,
beguiled by the anomaly of his charm
both puerile and old before its time,
attempted to lure Lear from his fantasy.
Threatened by phantasmagorial reality
He ran a mile, preferring to dwell ever
more beneath Her Winter Houses Moon.
And so, regressive and old-fashioned,
unhappily trapped between the
ever after and once upon a time,
he sent out his ridiculous, satirical cat,
to court with wisdom and truth,
in a beautiful pea-green boat.
But now the winter warps the water,
And the Winter House looks out
No longer to a halcyon sea,
or a land of invention and magic:
Only the looking glass, back to front,
mocking Her moon's distorted image. 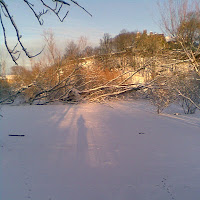